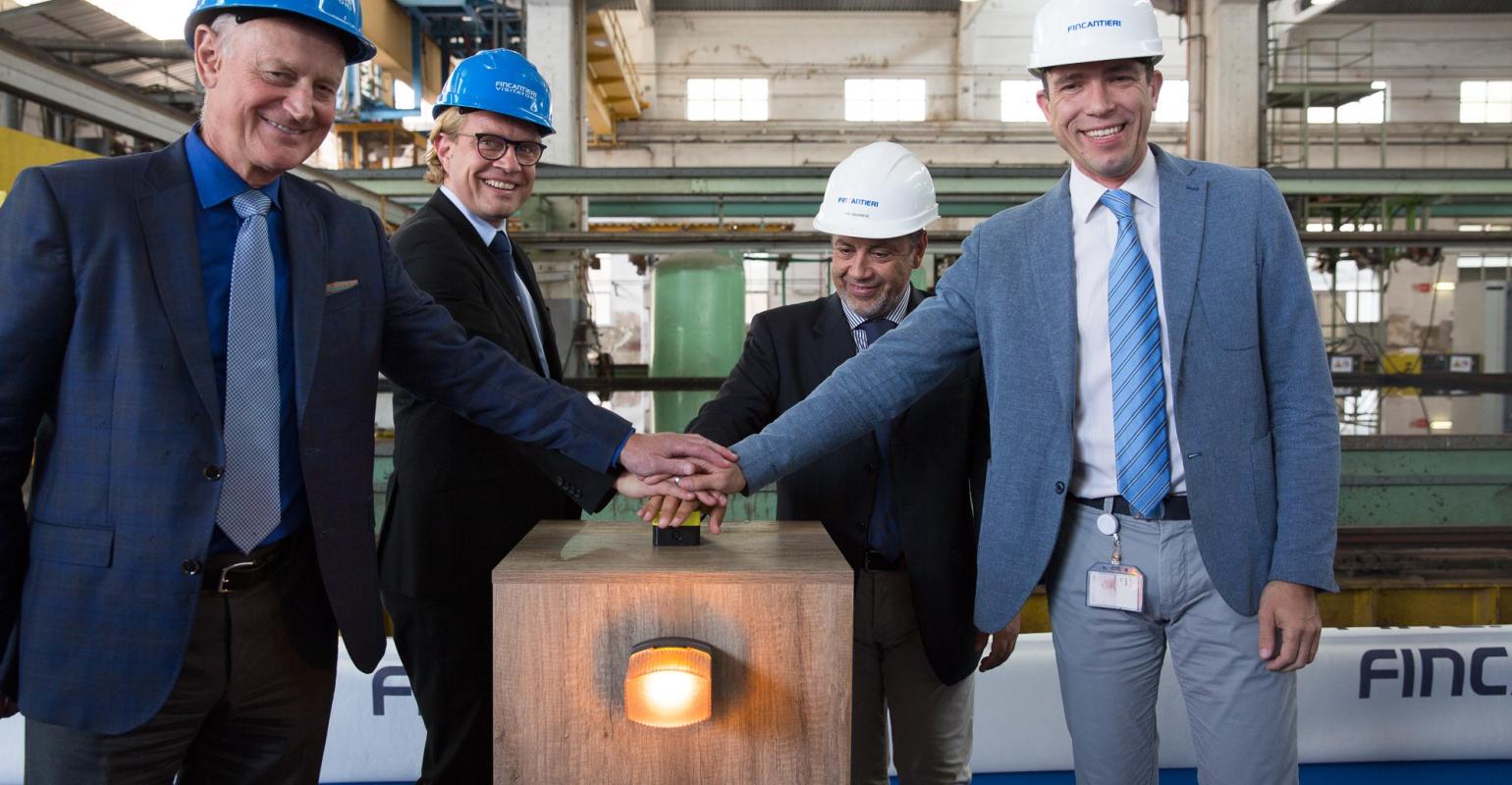 Christopher Prelog, second from left, pushed the button to start the steel-cutting. At far left is John Gunner, VP of expansion projects, Windstar. At right are Fincantieri Shipyard Director Salvatore Savarese and VP of Ship Repair and Conversions Andrew Toso

The first steel was cut for what will become the new midsection of Star Legend today at Fincantieri’s shipyard in Palermo, Italy.

This is the second of three new midship sections being designed and constructed as part of Windstar Cruises’ $250m Star Plus Initiative, to expand and transform the line’s three Star-class vessels.

‘This is a momentous day for Windstar as we reach another major milestone,’ said Christopher Prelog, VP fleet operations for Windstar, who pushed a button to activate the torch to make the first cut in the steel.

‘A project of this magnitude takes time to realize and unfold,’ he continued. ‘We’ve accomplished so much already on the first ship, Star Breeze, along with our partners at Fincantieri, that it makes the excitement for Star Legend that much greater.’

Prelog said it was an especially meaningful moment for him personally, since Star Legend was the first ship he worked aboard in the cruise industry, two decades ago.

‘We are very proud to partner with Windstar for such an ambitious program,’ said Andrew Toso, VP ship repair and conversion of the Fincantieri Services Division.

Star Legend will undergo the transformation from a 212-passenger ship into one with capacity for 312 passengers by installing a midsection to enable the addition of 50 new suites.

In addition, the extended ship will have two new restaurants including the eclectic, Spanish-styled Cuadro 44 by Anthony Sasso and a modern, alfresco Star Grill by Steven Raichlen. A new pool and whirlpool, a reimagined spa and fitness center and new shops are other elements of the transformation.

The new midship sections for Star Legend and sister Star Pride, to come in 2020, will be built and inserted along with new environmentally friendly engines. Each section will be fabricated over an approximately six-month period.

The first ship to emerge from this transformation, Star Breeze, is scheduled to sail from Barcelona to Lisbon on Feb. 20, 2020, and celebrate re-inaugural activities at PortMiami on March 19, 2020.

Star Legend’s transformation will be completed in late June, and the ship will debut in Barcelona on July 2, 2020. Star Pride is due to emerge from the shipyard in fall 2020, with its first cruise sailing from Barcelona on Nov. 20, 2020.