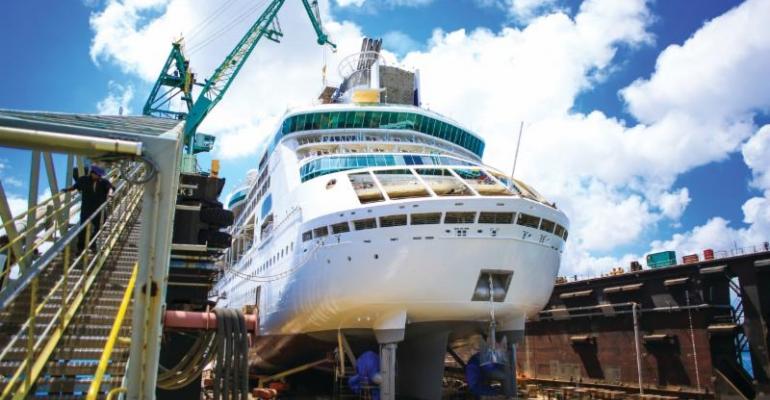 Grandeur of the Seas received a scrubber system, enhancements to aluminum and steel structures, complete hull blasting and application of silicone coating
After completing 23 cruise ship dry docks in 2017, Grand Bahama Shipyard eyes an even busier 2018, with 29 cruise vessels scheduled for repairs, refurbishments and revitalizations.

Highlights include a project for Carnival Cruise Line similar to last autumn's pivotal Carnival Elation work, when the yard provided its first fully turnkey solution of complex steel fabrications for a major revitalization.

Another Carnival ship is to undergo revitalization within a 30-day period with turnkey solutions including the fabrication and installation of new steel structures. Among them: a cabin block structure incorporating additional cabins, new structures that will become balconies for midship and aft cabins on several deck levels, the fabrication and installation of a ducktail and sponsons, and steel fabrications as base components for interior work that will enhance general public spaces.

Grand Bahama Shipyard also will fabricate the major support structures for a new water park. Standard overhauls to piping and mechanical systems are planned, along with complete hull treatment, thruster and stabilizer overhauls and ABB Azipod overhaul. On another Carnival ship, 'bridge wing suites' will be added, having proven a success with customers on other ships in the fleet.

Royal Caribbean will have two ship revitalizations in 2018. Major projects will run concurrently with the yard providing turnkey fabrication and installation of aluminum deck blocks for the incorporation of suites. Major support structures for new water parks also will be fabricated.

In the first half of 2017, Carnival Cruise Line docked five vessels. Each project entailed full hull blasting and application of silicone coatings and major technical projects like steel replacement in underwater areas and pipe replacements in multiple systems throughout the vessels.

Grand Bahama Shipyard supported the overhaul of thrusters and stabilizers, as well as fabrication and installation of sea chests that were fitted into hulls to support the requirements of newly installed scrubber systems. Other major technical projects were the positioning of auxiliary diesel generator modules on four ships and, part of a major cooperative project involving the yard, ABB and Carnival, the installation of a cycloconverter.

On the hotel side, Grand Bahama Shipyard supported Carnival's hotel refurbishment team with interior structural modification works on several vessels and the construction and installation of a WaterWorks attraction.

The late 2017 repair season handled additional Carnival ships including the pivotal Carnival Elation project, the first time the yard provided a full turnkey solution for a major revitalization that entailed deck fabrications for cabins and passenger areas and other complex steel fabrications, along with the installation of a ducktail and sponsons to aid buoyancy. The successful installation of the ducktail and sponsons involved detailed 'mapping' of the existing hull form, then matching existing frames to the frames on the new structures.

Royal Caribbean's Grandeur of the Seas received a scrubber system, enhancements to aluminum and steel structures of the upper deck, and complete hull blasting and application of silicone coating. A project of note undertaken by the yard was the erection and maintenance of a complex, 1,500-cubic-meter scaffolding structure to support interior renovations. Two additional Royal Caribbean vessels underwent similar work in late 2017 dockings.

Princess Cruises' Caribbean Princess and the Pacific Princess had approximately 11 tons of steel replaced in structural projects on the hull and upper decks. Other notable projects included the application of the new Princess livery on the bow of each vessel by a team from the yard's hull treatment department. Work on another Princess vessel also was completed in late 2017.

Celebrity Summit received a major Azipod overhaul in April. The yard team is so versed in this work that the ship was ready to return to operations within seven days of going dry.

Norwegian Cruise Line docked five ships in the first half of 2017. Work on Norwegian Sky included pool structures, replacement of galley equipment and supporting a Rolls-Royce overhaul of CPP and thrusters. The yard further assisted by building and maintaining complex scaffolding to support interior renovation projects.

On the world stage, Grand Bahama Shipyard leads the way in organizing and supporting Azipod and Fixipod overhauls.