Icon of the Seas, new world's largest cruise ship, goes all out for families 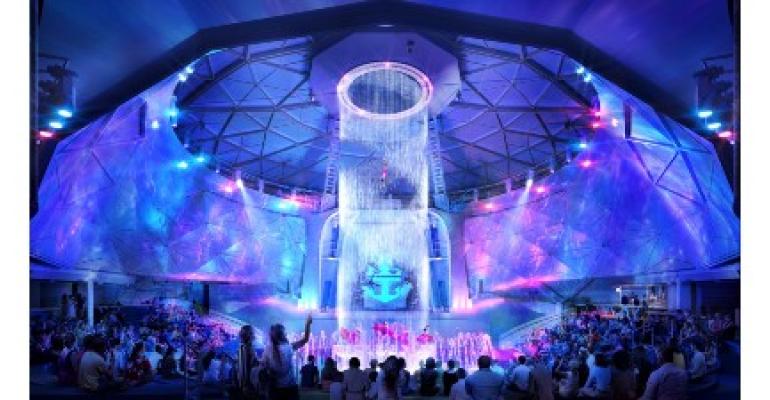 Icon of the Seas, the new world's largest cruise ship — yes, it outsizes Oasis — will have eight neighborhoods, five of them new, including one for young families.

As revealed today, the whole ship is focused on families, even more than Royal Caribbean International has ever before. Icon offers the largest water park at sea, and over 80% of accommodations have berths for more than two people.

'This is going to be the best family vacation in the world,' Royal Caribbean President/CEO Michael Bayley said, adding Icon combines a beach retreat with a resort escape and a theme park adventure.

Icon of the Seas sports a distinctive profile with a plumb bow, a huge glass dome up top and forward, and a swirl of six colorful waterslides aft.

Slide on down to Surfside

Speaking of slides, one indoors zips riders of all ages from Central Park to Surfside, two decks below.

Throughout, the entire ship is a bright and colorful confection of hot pink, aqua, sky blue, lemon yellow, lime green and orange.

Icon will have 40 new and returning dining, bar and nightlife options and 28 categories of accommodations, 14 of them new — giving many more choices for families, according to Vicki Freed, SVP sales and trade support & service. 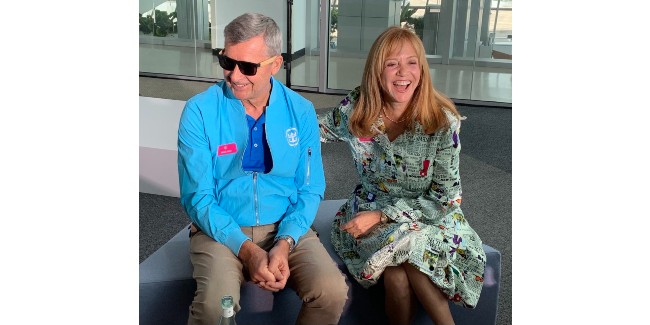 As well, Icon has 'significantly more spacious rooms' than other Royal Caribbean ships and more than double the number of accommodations with third and fourth berths as the Oasis-class ships, Freed said. The balconies are larger, too.

Icon's 'size and scale fit all demographics with multigenerational spaces,' Bayley said, and 'from a marketing perspective, everyone is a family' — including couples and friends.

Also, family travel is not just tied to the school holidays, he continued, with research showing young families with kids 6 and under vacation year-round, skewing toward the Caribbean.

'Young families are a big market, an underserved market,' according to Bayley. Icon of the Seas' entire Surfside neighborhood is dedicated to them.

Aboard this new class of ship, the neighborhoods are better connected, with greater flow, and more daylight, according to Royal Caribbean's Sascha Lang, VP architecture & design, newbuild & innovation.

AquaDome – 'The scale of the AquaDome will take your breath away. It's an absolute engineering marvel,' Bayley said.

Perched at the top of Icon, this is a transformational space — by day, a tranquil oasis for a bite or a drink, with wraparound ocean views and a 55-foot waterfall. By night, it splashes out as the new location for spine-tingling AquaTheater shows, with a transforming pool, four robotic arms and the latest projection technology. 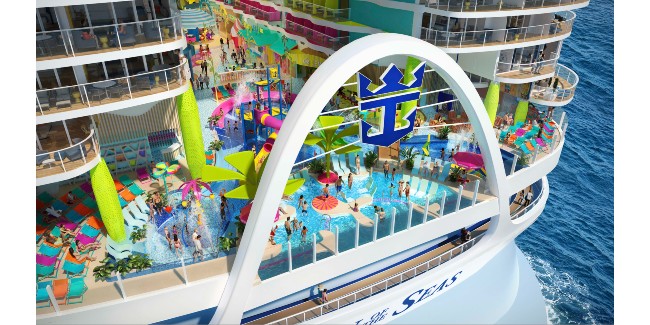 Surfside — a place where young families will want to stay and play all day.

Surfside – Reminiscent of Boardwalk on the Oasis ships, Surfside is way more developed, a place where young families with kids 6 and under will want to stay and play all day.

Jennifer Goswami, senior manager, product development, said Royal Caribbean worked with 10 futurist firms to learn what families want in a vacation — and the main thing is 'no compromise.' In other words, experiences for both adults and kids.

Goswami noted that at any time, there may be up to 600 children ages 6 and under on each Oasis-class ship, and that's how Surfside was born.

Grownups can soak up the views at Water’s Edge pool, as they keep an eye on the kids at Splashaway Bay and Baby Bay. Just steps away are dining options, places to lounge, a bar, the signature carousel — here designed to feel like riders are on a pool float, an arcade, kids' club Adventure Ocean and Social020 for teens. 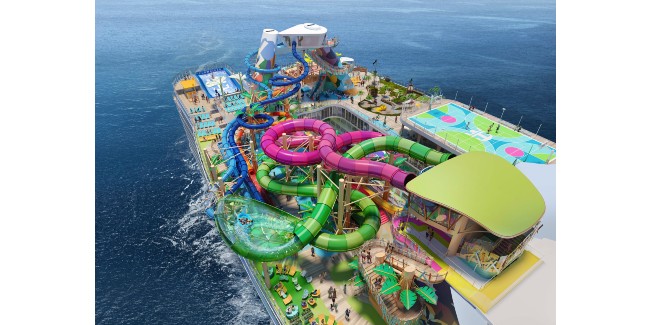 It has six record-breaking slides: one with a 66-degree incline making for an open free-fall slide, the 46-foot-tall Frightening Bolt that's the tallest drop slide at sea, a pair of family raft slides and cruising’s first mat-racing duo. 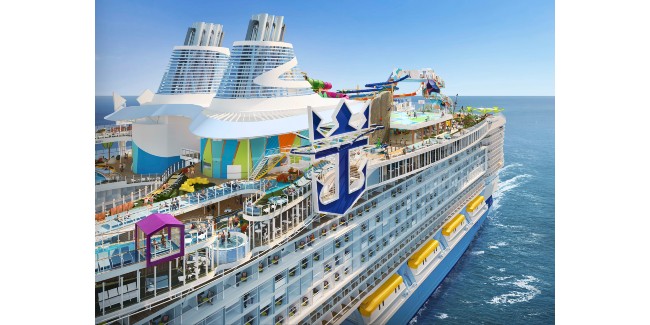 Incorporated into the brand's giant Crown & Anchor symbol, Crown’s Edge is part skywalk, part ropes course and part thrill ride that culiminates in a shocking moment with a swing 154 feet above the ocean.

Thrill Island is also home to the FlowRider. 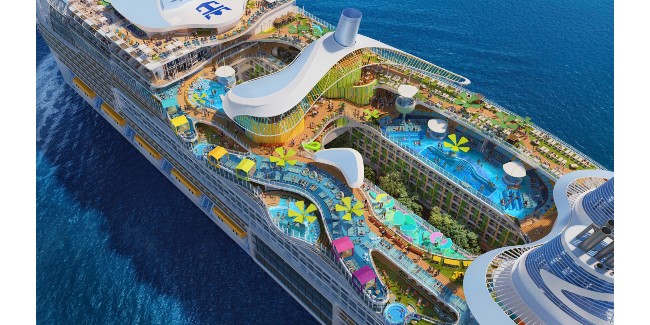 Chill Island – Among the seven pools onboard, four are in this three-deck slice of paradise, each with prime ocean views. Found here are the line’s first swim-up bar at sea; the Royal Bay Pool that's the largest pool at sea; Cloud 17, an adults-only retreat; and the serene, infinity-edge Cove Pool. 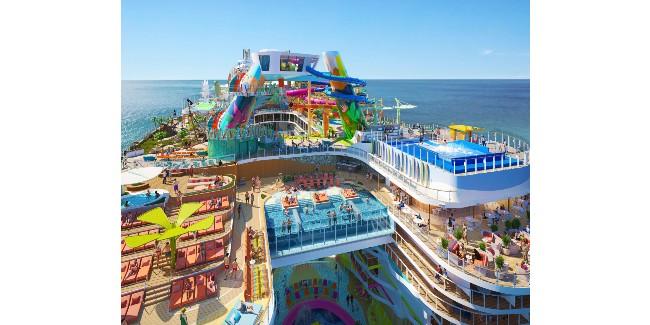 The Hideaway – Tucked away, this neighborhood 135 feet above the ocean combines the vibes of a beach club with uninterrupted ocean views. The first suspended infinity pool at sea is at the center of it all, facing aft, and it’s surrounded by a multilevel sun terrace with whirlpools, a variety of seating and a dedicated bar.

Central Park — Here, it's lusher and leafier than ever, with more walk-up windows for indoor-outdoor dining and drinking. A new jazz venue will find its home in Central Park, along with the Asian-inspired Izumi. And the staterooms overlooking the space have colorful window shutters for a new look and more privacy. 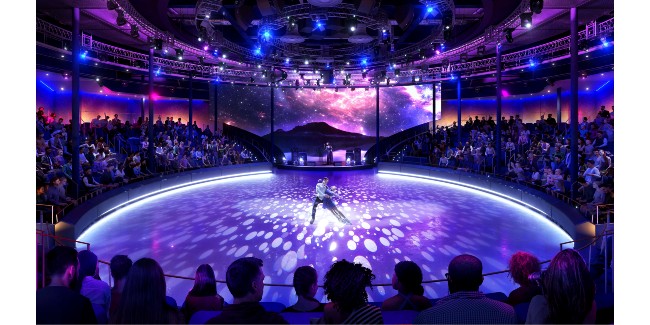 Royal Promenade — For the first time the Royal Promenade will have sweeping ocean views through floor-to-ceiling windows. And it's the new, more prominent home to Royal Caribbean's largest ice rink. Plus, there will be more than 15 restaurants, cafes, bars and lounges including a pub, Schooner Bar and Giovanni’s Italian Kitchen & Wine Bar. 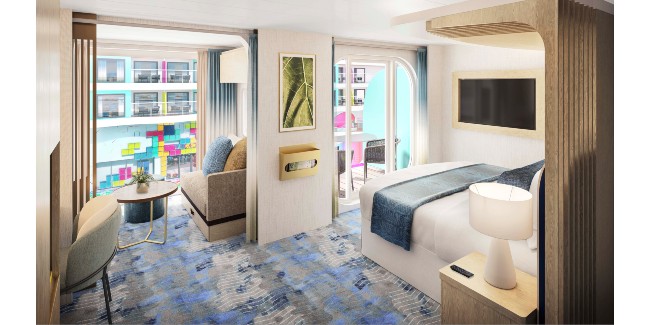 With 28 ways to stay, there are more choices of accommodations, including new layouts for families of three, four, five and more, like the Family Infinite Balcony and Surfside Family Suite, with kids' alcoves tucked away from the adults. Among the best views are from the brand’s first Sunset Corner Suites and Panoramic Ocean Views in AquaDome.

The Ultimate Family Townhouse is three decks tall, with a slide, karaoke, two balconies and a direct entrance to the Surfside neighborhood. It sleeps eight.

Freed called it 'the most wowy suite on any ship.'

Coming to life at Meyer Turku and in the Innovation Lab

The LNG-powered Icon of the Seas is under construction at Meyer Turku in Finland, but much of the creative genius going into it emanates from the Innovation Lab at Royal Caribbean's Miami headquarters.

This is where the visualization, development and testing of concepts takes place. A shop area with a milling machine and 3D printer builds prototypes and models. These range from individual pieces like window shutters to entire areas that enable the creatives to hone their designs.

Some of the concepts in development are 'Brain Freeze,' a backpack ice cream delivery machine, and an Izumi to go cart. These and other ideas may never see the light of day, or they may evolve into something completely different.

Bayley chuckled as he hinted about an undisclosed 'fun, wacky thing that's coming' on Icon.

Upstairs at the Innovation Lab, The Cave is one of the world's largest 3D virtual reality spaces, 'a tool we use daily,' according to Sascha Lang, who said approximately 1m working hours have gone into Icon's design process — not counting the hours of labor contributed by suppliers and the shipyard. 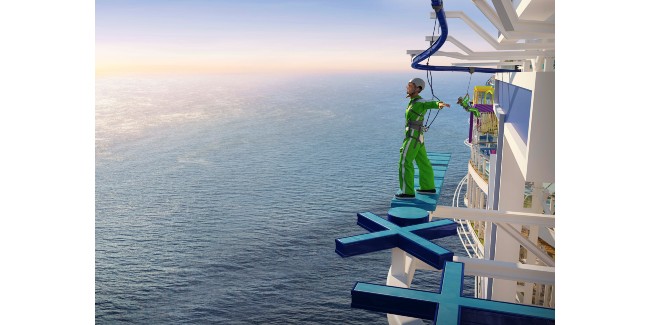 'We are always excited when Royal Caribbean announces a new class of ships, because we know the wow effect is always at the forefront of what they do,' said Michelle Fee, CEO and co-founder of Cruise Planners.

'The timing couldn’t be better, with the sky high demand for travel,' she added. 'Whenever a new class of ships is announced, we see a tangible surge in bookings, so I’m looking forward to hearing all about the new Icon of the Seas. Royal never disappoints — they are pioneers of pushing boundaries and just when you think they can’t outdo themselves, they do.'

Fee thinks the line's focus on families is 'on the mark ... With the protocols and boundaries being removed, along with skyrocketing airfares, cruising is an affordable vacation option,' she said. 'Having had limited places to travel the past couple of years, families are looking for a vacation with an abundance of options.'

Arriving in late 2023 ahead of its January 2024 debut, Icon of the Seas will sail year-round from PortMiami on seven-night itineraries to the eastern and western Caribbean. Ports include Cozumel, St. Maarten and Roatán. Every Icon cruise visits Perfect Day at CocoCay.