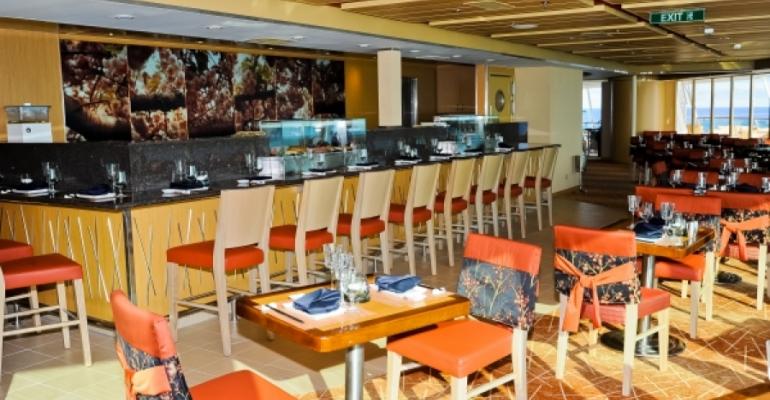 Izumi, pictured here on Radiance of the Seas, is among new dining spots coming to sister ship Jewel of the Seas (Photo: Royal Caribbean)

New accommodations, restaurants, technology upgrades including VOOM Wif-Fi and a poolside movie screen are part of a $30m makeover planned for Jewel of the Seas.

The work will be completed in April prior to the ship's May to October eastern Mediterranean season from Civitavecchia (Rome).

Additions include a two-bedroom family suite and 24 new outside and balcony accommodations. Giovanni’s Table, Vintages and Izumi, some of Royal Caribbean International's signature dining venues, will join the options. Chops Grille, the spa and retail areas also will be refreshed with a modern design.

Jewel of the Seas will be adding poolside movies on a big screen, too.

Royal Caribean's super-fast VOOM Internet will be another feature incorporated into the 2004-built Radiance-class ship.

The round-trip Rome schedule enables competitive airfare options from US gateways. Jewel of the Seas will operate seven-, eight- and nine-night cruises to destinations in Italy, Greece and Turkey. Piraeus (for Athens), Mykonos, Kusadasi (for Ephesus) and Santorini are among them.

RCI president and ceo Michael Bayley expects Jewel of the Seas to appeal to both loyal, seasoned customers and the 'young, experience-seekers that we are speaking to with our new "Come Seek" campaign.'