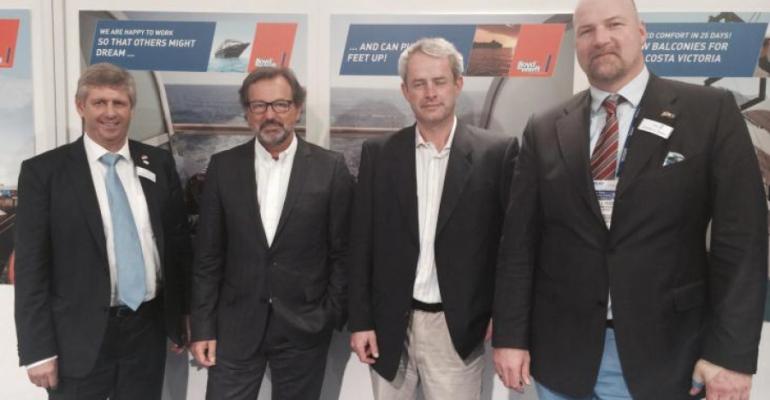 TUI Cruises and Bremerhaven-based Lloyd Werft signed a deal for an eight-day refit of Mein Schiff 1, to be carried out in a couple of weeks. The contract was signed Wednesday by TUI Cruises ceo Richard Vogel and Lloyd Werft board members Rüdiger Pallentin and Carsten Haake at Cruise Shipping Miami. The price of the overhaul was not disclosed.

The April 24 to May 3 work will comprise mainly standard class-renewal work plus a refit of the stabilisers and five side thrusters and new hull coating.

TUI Cruises and Lloyd Werft described work on the air conditioning system as the greatest challenge: Two chilled water units are going to be exchanged, which entails work on their foundation and the piping system.

The eight-day schedule is rather tight. 'But tight deadlines are nothing new for us,' Lloyd Werft’s Pallentin said. 'We know Mein Schiff 1 from her conversion five years ago, and are well-prepared for the job.'

Lloyd Werft converted the former Celebrity Galaxy into Mein Schiff 1 in May 2009.

Passengers will disembark at the Columbus Cruise Center in Bremerhaven on April 24, and new guests will embark at Bremerhaven immediately after the overhaul, on May 3. The close proximity of the cruise terminal and yard is an important time-saving factor that facilitates the tight schedule.