A look inside the new Legend of the Seas 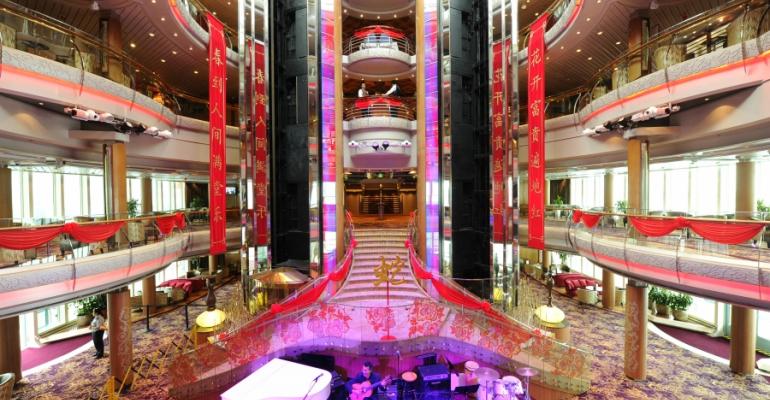 Legend's new-look Centrum, decked out for the welcome ceremony

Some 1,500 mainly Asian passengers explored the new restaurants, entertainment and refreshed accommodations of Legend of the Seas on a two-night sailing from Singapore to Malacca following the ship’s $US50m revitalization at Sembawang Shipyard.

The captain and crew held a ceremony to unveil Royal Caribbean International’s longest Asia-based vessel which carried 13 nationalities, mostly Singaporeans, mainland Chinese, Indians and Indonesians, as well as some Malaysians.

Given its history, Legend of the Seas is probably RCI's best known vessel in Asia and has been instrumental in helping to develop Royal’s presence in the region. It first homeported in Singapore in 1999. After a break, Legend returned in late 2007 and has been operating in Asia for the past few seasons.

In a few months the 69,130gt, 1995-built ship will be leaving, though, to make way for Mariner of the Seas. That bigger, newer vessel joins sister Voyager of the Seas in the region this spring. Legend of the Seas will reposition to Europe for the summer to operate cruises from Civitavecchia and Venice before heading to the Americas in November for Southern Caribbean and Panama Canal sailings.

Legend of the Seas’ post-drydock Singapore season highlights include a new seven-night ‘Borneo Explorer’ cruise to Kota Kinabalu and Bandar Seri Begawan (Brunei) and a five-night Bangkok and Ko Samui cruise in March.

On the first two-night sailing, passengers got a taste of Oasis-class amenities that are being added across the fleet in a series of revitalizations. Cruisers took advantage of the new technology such as ship-wide Wi-Fi and touch-screen wayfinding signs displaying more than a dozen languages, including several Asian ones such as Mandarin, Korean and Japanese.

Also new are signature eateries like the Park Café, Chops Grille steakhouse and Izumi Asian Cuisine, featuring a la carte sushi. Plus, there’s a Chef’s Table co-hosted by the executive chef and sommelier for a multi-course, wine-pairing experience.

The pool area now features a giant movie screen and there are flat-screen televisions in updated staterooms and new family suites. Also new are the Concierge Club and Diamond Lounge. The library and card rooms were removed to make way for more balcony staterooms.