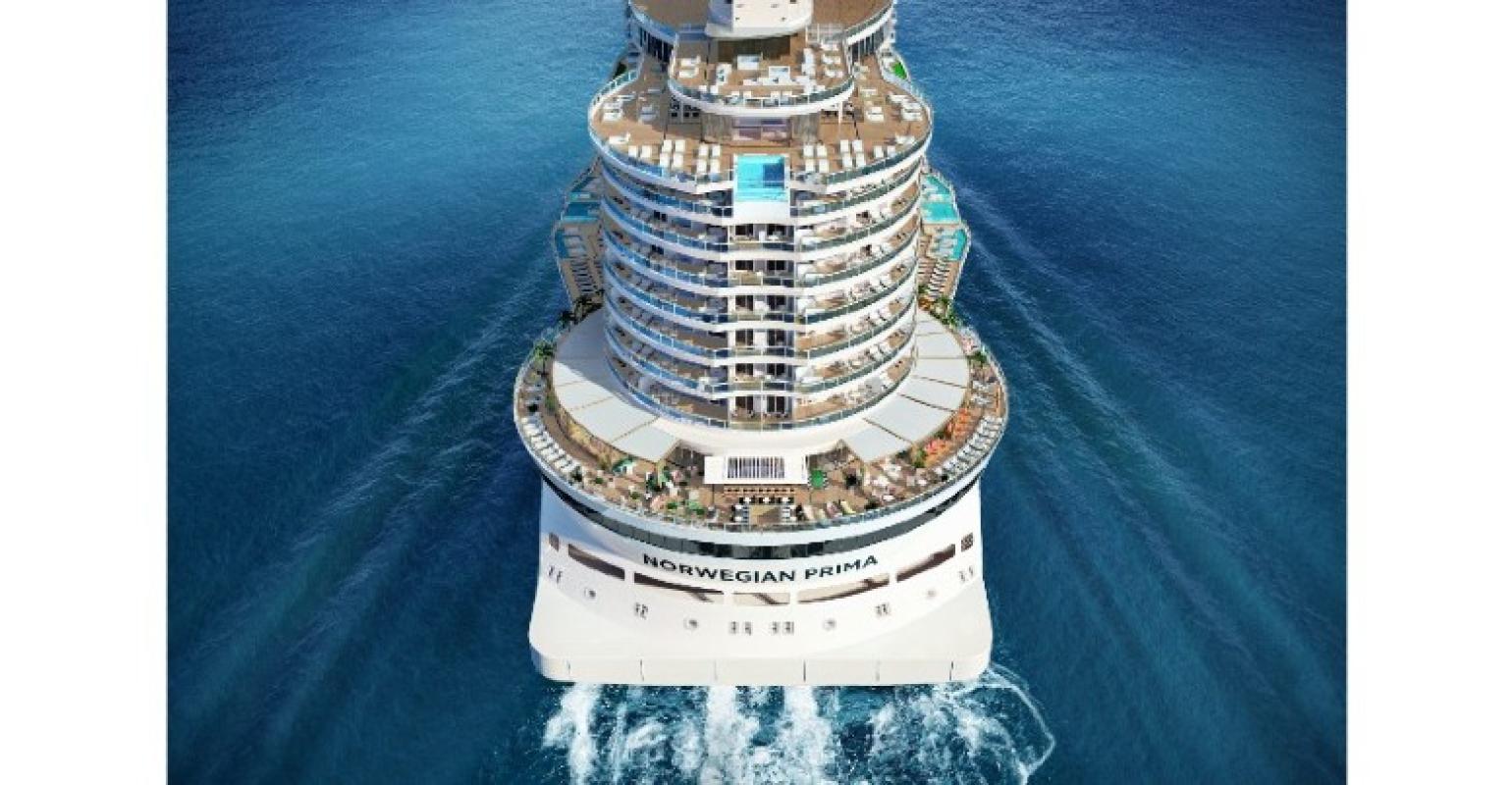 Norwegian Prima will have more open deck space than other NCL vessels. Located on Deck 8, the 44,000-square-foot Ocean Boulevard (seen here right above the ship's name) wraps around the entire deck and offers indoor-outdoor dining/activities. Rising above: The Haven, with its sun deck infinity pool
For the first in its new six-ship series, Norwegian Cruise Line is going upscale with Norwegian Prima.

Prima, which means 'first' in Italian, will have the brand's most outdoor deck space, most spacious accommodations and an Ocean Boulevard (enlarged from The Waterfront concept on prior ships) packed with indoor-outdoor dining choices.

It's also the first NCL ship by Fincantieri, and will be built at the Marghera yard.

'Norwegian Prima personifies everything our guests love about NCL and raises the bar,' President and CEO Harry Sommer said. 'This will absolutely rival anything in this part of the market in terms of service, space, beauty, amenities, entertainment ... NCL's going upscale.'

Standing up to Celebrity

This makes it smaller than the latest Breakaway Plus newbuilds at 167,800gt and 4,200 lower berths and slightly larger and more spacious than the enlarged Celebrity Beyond at 140,600gt and 3,260 lower berths.

That said, NCL will be be staying squarely in the family market. Norwegian Prima will have activities that appeal to younger clientele, to be announced over the summer. Sommer quipped that he 'can't confirm or deny a go-kart track.'

Norwegian Prima will have mind-bending hull artwork designed by Italian graffiti artist Manuel Di Rita, known as 'Peeta.' For the first time on an NCL ship, this decoration extends to the forward superstructure.

NCL asserted Norwegian Prima will offer the highest staffing levels and space ratio of any new ship in the contemporary and premium sectors. There will be 13 suite categories, the largest three-bedroom suites of any new ship and NCL's largest standard staterooms and largest bathrooms and showers for standard categories.

NCL also claimed Norwegian Prima will have the most outdoor deck space of any new ship including the most total pool deck space of its fleet, multiple infinity pools and vast outdoor walkways.

The Haven by Norwegian will offer NCL's most exclusive and centralized suite complex, all styled by Piero Lissoni, one of Italy's preeminent designers. Spanning eight decks of suites and public areas, this keycard-access ship-within-a-ship locates all 107 Haven suites aft, within close proximity of private elevators.

The Haven will be more open to the sea than in the past, with every public space offering views. The Haven Courtyard was transformed into a sun deck with an infinity pool overlooking the ship's wake and a new outdoor spa with a glass-walled sauna and cold room.

NCL reimagined The Waterfront by doubling the space and adding a greater variety of experiences and dining options, creating the new Ocean Boulevard. This 44,000-square-foot walkway wraps around all of Deck 8.

Three additional dining venues on Ocean Boulevard offer indoor and outdoor seating. They are Onda By Scarpetta, which debuted on Norwegian Encore, Los Lobos and The Local Bar & Grill.

The revamped Local Bar & Grill is set in an upscale beach club atmosphere that will showcase live music to accompany cocktails and classic American cuisine.

Other firsts for Norwegian Prima include The Concourse, an outdoor sculpture garden with an art wall by David Harber and six installations by Alexander Krivosheiw. Valued at more than $2m, the seven sculptures have stunning effects that change as the sun sets, making them ideal for photos and social media posts.

Travelers can relax at Infinity Beach with its two infinity pools, one on each side of the ship and close to the sea. Two Oceanwalk glass bridges, also new to NCL, give breathtaking views over the water. La Terraza, an open-air lounge, provides a retreat for forward-facing sea views.

Norwegian Prima is scheduled to debut in August 2022 with NCL's widest inaugural showcase ever, stretching from Northern Europe to Bermuda, the Caribbean, Galveston and Miami before settling for a season at Port Canaveral.

View from the deck: new features on board MSC Cruises’ MSC Virtuosa
May 28, 2021