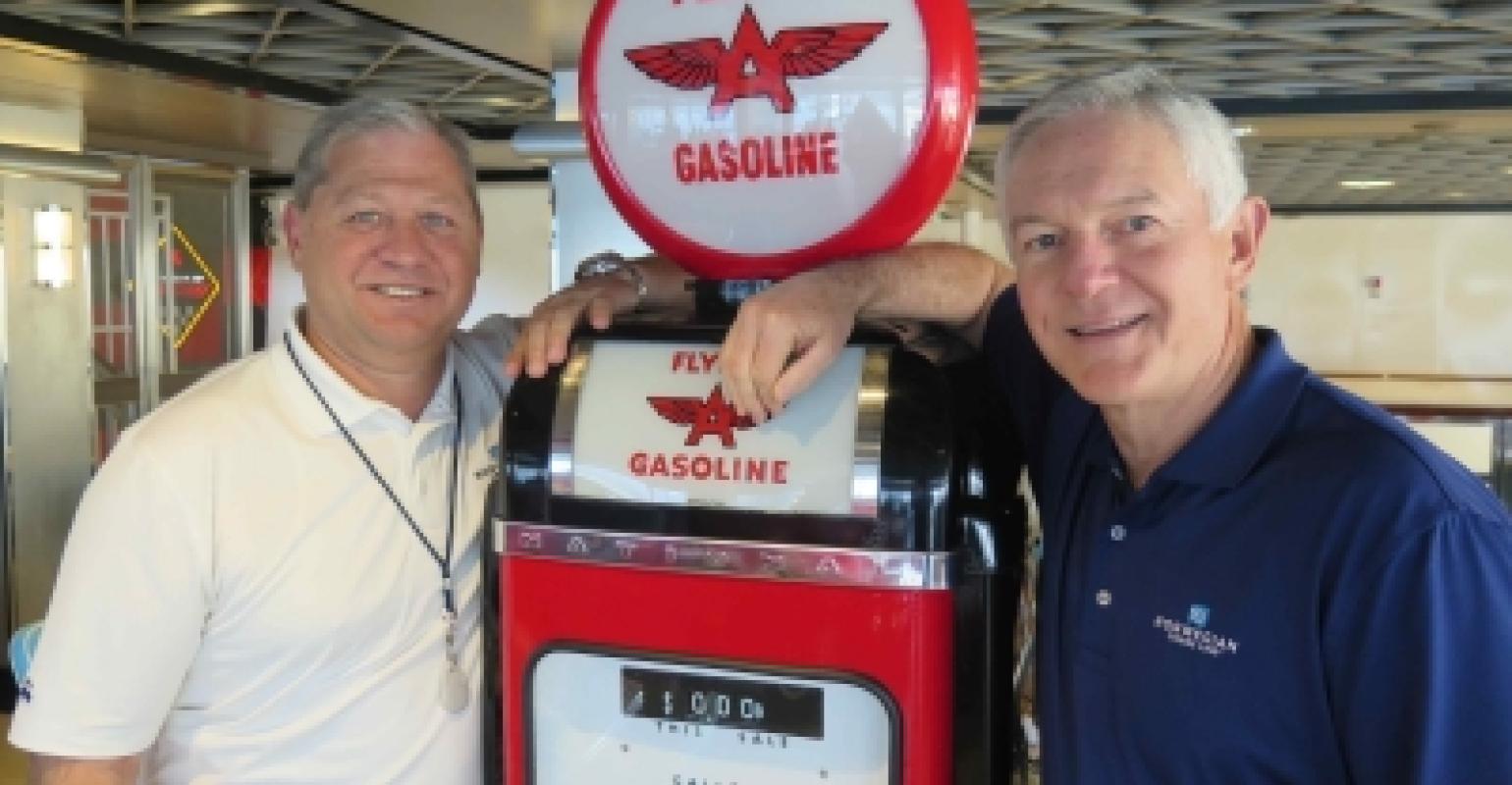 NCL's Mark Kansley, left, with Norwegian Cruise Line Holdings' Robin Lindsay at the American Diner, one of the venues that didn't change in Norwegian Joy's conversion for Western service PHOTO: Anne Kalosh
Built two years ago for the Chinese market, the 'Westernized' Norwegian Joy has just debuted at Port of Vancouver after more than a $50m transformation for North American service.

'For China, the ship had a huge amount of retail and casino space. That was reduced and we created bars, lounges and restaurants that didn't exist,' Lindsay said.

Making Joy more relevant to the Western market and as close as possible to 2018's wildly successful Norwegian Bliss were the drivers.

During the just-completed work, an observation lounge was added, requiring the removal of 22 of the 95 concierge-level rooms. (The concierge accommodations are unique to Joy.) Replacing a retail area and the tearoom with The Local Bar and Grill, a casual 24-hour restaurant on Deck 7, meant installing a galley with all its needs such as power, extraction fans and A-60 boundaries.

The 'Q' Texas Smokehouse — 'very popular' on Norwegian Bliss, according to Mark Kansley, SVP hotel operations for Norwegian Cruise Line—replaced Norwegian Joy's Supper Club, with the space gutted and rebuilt and a bar added. As on Bliss, it features the banana pudding made to Lindsay's Aunt Julia's recipe (direct from Elysian Fields, Texas).

Norwegian Joy was built with an American Diner. That remains.

The spa and fitness area were enlarged, with the number of treatment rooms dramatically increased by moving the gym equipment into the space originally occupied by the Noodle Bar and its galley.

Nearby, Serenity Park, an open deck area for tai chi and yoga with artificial grass and trees, was transformed for sunbathing with lounge chairs.

The go-kart racetrack was lengthened by 20 meters and widened to make it 'more interesting,' as Lindsay put it, with a passing area that enables cars to overtake the ones ahead.

In the Galaxy Pavilion, the bumper cars area was removed to make room for additional virtual reality games. A teen club, Entourage, was built next door.

An area where Norwegian Joy remains different from other NCL ships is the lack of studios (for singles). Typically there would be about 82 of those. Overall the ship has 1,902 passenger accommodations.

One of the biggest tasks of the refurbishment, Lindsay said, was replacing carpet throughout the ship.

'Almost a twin to Bliss'

The vessel left China March 11 and spent 47 days at Sembawang Shipyard in Singapore, departing from there April 6. It made stops in Taiwan and Yokohama, Japan, to offload trash from the work, before arriving at Seattle April 20. There, at Vigor Shipyards, the final touches were completed.

In China, Norwegian Joy carried 60% Chinese crew, Kansley said. For its North American service, that shrunk to 5% to make the typical NCL crew demographic of some 60 nationalities.

For the past few days, some 200 NCL shoreside staff have been aboard, busily preparing for the first (non-revenue) travelers stateside. Some 2,500 travel partners and media embarked Friday at Vancouver's Canada Place for a preview sailing down the coast to Los Angeles. There, a second preview will take place before the first revenue cruise from Seattle to Alaska on May 4.

The ship will spend a full year on the West Coast, sailing to Alaska from Seattle, then from Los Angeles to the Mexican Riviera and Panama Canal and back to Alaska. Joy will reposition to Miami for Caribbean service in winter 2020/21.

This month NCL announced Joy will head to New York in April 2021 for Bermuda and Canada/New England cruises.