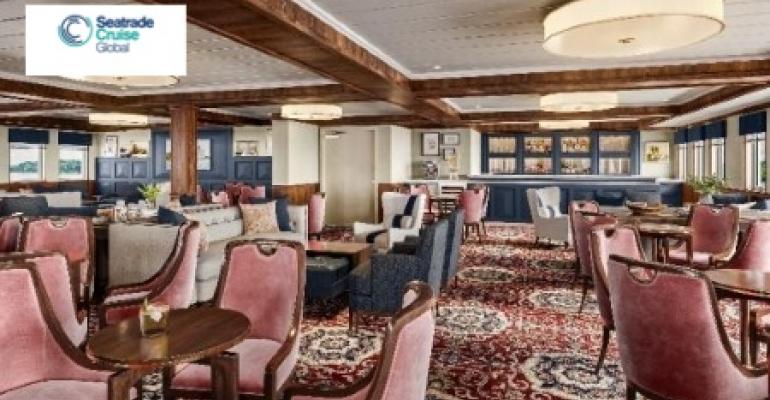 The design will bring paddlewheel cruising to the same sophisticated standard as on American’s newest modern riverboats while retaining traditional elements true to steamboat history.

This follows the unveiling of American Melody's new-look interiors when it began its 22-day inaugural voyage on the Mississippi River early this month.

'American Melody’s extraordinary reception, particularly by our loyalty program members, has inspired us to bring the same new aesthetic to our entire paddlewheel fleet,' Robertson said. '[Loyalists] love the casual sophistication of the ships. We've always tried to have that casual element; now we try to bring that cosmopolitan sophistication into the design.'

As the paddlewheelers get their new look, their names will be changed to include the American moniker that denotes other vessels in the fleet. America, Queen of the Mississippi and Queen of the West will be renamed American Splendor, American Heritage and American West, while American Pride will retain its original name.

'So we'll have a fleet of ships with the same name, same brand and same design aesthetic,' Robertson said. This will all go into effect when the paddlewheelers begin their 2022 seasons in March, following their 2021/22 winter lay-ups when the retrofitting will be carried out. The two Columbia River boats will operate into November this year and the two on the Mississippi through December.

The paddlewheelers' redesign will be completed by Studio DADO of Miami, which created the interiors for American Melody.

American Cruise Lines resumed service in March at just 30% occupancy, then went up to 75% going into the summer and now has ramped up to almost full occupancy, Robertson said. The company still has medical staff on board, quarantine rooms and a testing room, which removes four to six staterooms from inventory.

'So we're near 100% occupancy and that's been going very well as we operate through the pandemic with the protocols in place,' he said.

During the pandemic, American has attracted new customers, including those who've sailed the oceans or European rivers or who traveled domestically but not on cruises. With the opportunity to introduce many more people to domestic river cruises, Robertson thinks the 'US market river space has exponential growth left in it.'

The company has stepped up production, going from one new vessel a year to two at its owned yard, Chesapeake Shipbuilding, in Salisbury, Maryland. Due out next year are American Symphony and American Serenade.

All in all, American Cruise Lines is sailing through the pandemic well.

'We're still here. We're still building ships,' Robertson said, 'I feel like we didn't miss much of a beat during the pandemic although there was an operational pause.'

Crew areas on board Crystal Endeavor created by ALMACO
Oct 13, 2021

Celebrity Beyond to have Diageo mixologists, new-look Cyprus Restaurant
Sep 30, 2021