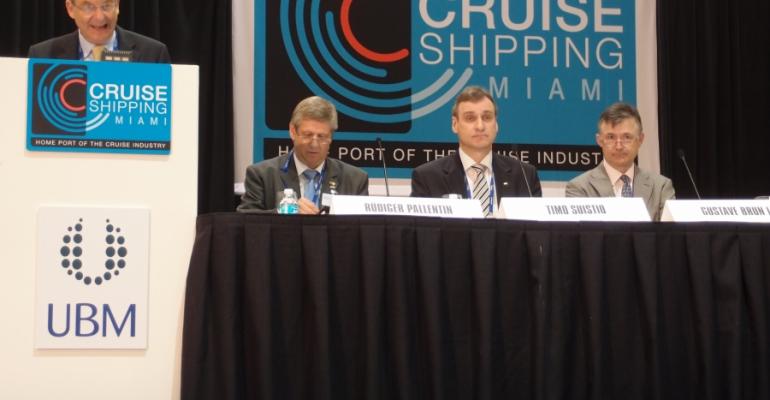 European shipyards face ‘lasting uncertainty about financing’ and ‘a severe lack of work’ with cruise deliveries dropping to six to eight a year compared to a dozen per year earlier, or ‘a smaller cake to be divided among an increased number of hungry yards,’ Fincantieri chairman Corrado Antonini told a Cruise Shipping Miami session.

All in all, the task for shipbuilders is very demanding, with safety as vital as ever and a spectrum of environmental challenges ranging from no discharge areas to strict sulphur limits.

The cruise industry will be impacted by new technical solutions, which may provide an opportunity for builders, Antonini said. And building for emerging markets could be a boon, as well.

Fewer, more efficient yards and more efficient ship designs are inevitable. ‘I think Europe has a future in this business and my yard will continue to be a leader in cruise ship building,’ the Fincantieri chief asserted.

With China showing ‘spectacular’ cruise demand, ships from the West are heading East but in time owners will want to build for China. When that happens, Antonini thinks there will need to be a cooperation between the experienced and emerging yards.

Meanwhile, newbuild prices appear to have bottomed out, while refurbishments are getting more costly and complex, panelists said.

In recent years steel and engine prices stayed high, the euro was volatile and labor costs edged up ahead of productivity gains. Though costs remained steep, cruise newbuild prices have plunged 30% since their 2008 peak, to about €140,000 per lower berth for a large (120,000gt) contemporary-segment ship, according to Gustave Brun-Lie, vp and senior partner newbuild, RS Platou.

Should net cruise capacity growth continue at 5% a year in 2015-2017, about eight new ships a year are needed. If that’s the actual demand level, there will be some downward pressure on newbuild prices because of overcapacity at the shipyards. However, as newbuild prices have already tumbled toward cost level, RS Platou thinks prices are ‘at the bottom,’ Brun-Lie summed up. ‘Maybe they can go down a little bit, but they’re basically at the bottom.’

Mike Kaczmarek, vp corporate shipbuilding, Carnival Corp. & plc, confirmed former STX France chief Jacques Hardelay’s assertion that owners want to pay less for more complex ships. Kaczmarek said six to eight deliveries a year for the industry is about right. His own company has 10 newbuilds under contract—three this year, two each in the next three years and one in 2016.

The focus is on very safe, environmentally sophisticated ships, while existing vessels face ‘major technical upgrade costs to meet new regulatory requirements,’ Kaczmarek said. Near-term designs will be evolutionary, with the exception of some dramatic technical changes in environmental and safety areas.

Recalling the post-9/11 drop in orders, Suistio noted the cruise business recovered quickly, leading to a record level of orders. Another low came during the sub-prime crisis. ‘It looks like we’ve hit the bottom,’ Suistio said. This time the bottom was higher than post-9/11.

STX proposes LNG as a solution to the challenge of Emission Control Areas, with Suistio citing the novel design for the Viking Line ferry under construction at his Turku yard.

Noting Carnival has built at all the major yards, Kaczmarek indicated the company will continue to do so, while also considering newcomers. He welcomed the re-emergence of Mitsubishi but added the balance still tips toward Europe. Brun-Lie agreed European yards will remain dominant, however Korea is determined and at some point will be successful in building a cruise ship.

Kaczmarek concurred. And, noting that every prototype is producing ‘dramatic advancements’ in efficiency, he said the shipyard today is viewed as an ‘innovation partner.’

The Mitsubishi Air Lubrication System, incorporated into the AIDA Cruises prototype, has existed for some time, the Carnival executive added, and is just one aspect of that ship’s environmental blueprint.

Suistio agreed hydrodynamics is a way to improve efficiency and said a lot of work can still be done inside ships, too, since there are many complex systems that impact fuel efficiency.

While ‘there are not going to be too many newbuilds,’ as Royal Caribbean’s Douglas put it, many ships are heading into their early teens, making them ripe for revitalization. He forecast ‘even more revitalizations and increasing complexity,’ adding: ‘The revitalization side is a tremendous opportunity for vendors and shipyards to get into the business.’

Carnival is also bullish on refurbishments, with a large number of ships at 15 years or older, the ‘sweet spot for refurbishment,’ Kaczmarek said. The recently announced Carnival Destiny project will be the largest in his company’s history.

Refurbishments will tend to increase density, the panelists said, and ‘making good use of space is key,’ Douglas added. One example is the conversion of Centrums into more active spaces including as a venue for aerial acrobatic performances.

Royal Caribbean has poured nearly $1bn into refurbishments over the past eight years, everything from installing diesel engines to CCTV systems. Ducktails to improve stability are increasingly prevalent as ships get heavier with age (and more paint layers) and when balconies and other structures are added.

So is efficiency. When the company Solsticized Celebrity Infinity at Grand Bahama Shipyard in December, the vessel was 21 days out of service, including 19 in the dock. With lessons learned, that was trimmed to 15 days in the dock when Summit was Solsticized in January.

Lloyd Werft has completed more than 150 cruise refurbishments over the last 30 years including conversions and lengthenings. The ‘must have’ on all ships today is balconies, said md Rüdiger Pallentin. Also in high demand: ducktails, spas and extensively redesigned interiors to make the ships appealing for cold weather operations as seasonality diminishes.

Redesigned bulbous bows can yield up to 5% in fuel savings, Pallentin said. And demand for ballast water treatment systems will cause a bottleneck at yards as all ships are converted to meet new regulations.

Kaczmarek noted more than 20 ballast water treatment systems are certified, and Carnival is testing three technologies. Retrofitting is complicated, with some ships easier than others, ‘and it is expensive,’ he said.