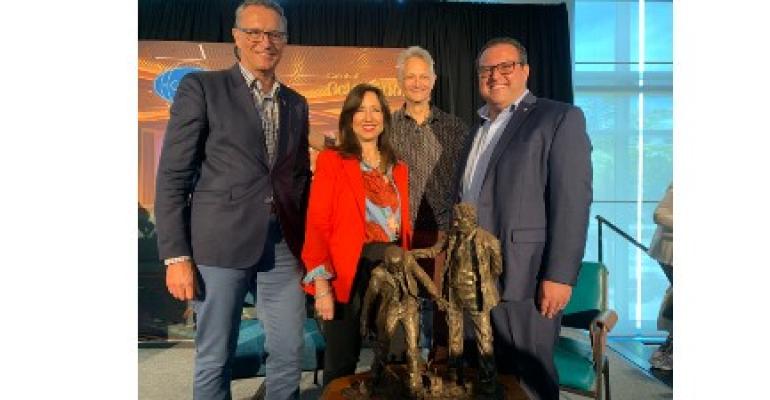 From left, Carnival SVP Ben Clement with Christine Duffy, Peter Knego and Glenn Aprile with the Carnival founder Ted Arison and Finnish shipbuilding giant Martin Saarikangas, given as a gift from Kvaerner Masa-Yards to the line at Carnival Sensation's 1993 delivery

Vintage treasures from past Carnival Cruise Line ships will find a home in the new Carnival Celebration's Golden Jubilee bar and lounge.

From hand-drawn designs by architect Joe Farcus to chairs recreated from Carnivale, cocktail tables from Carnival Fascination and a nickel and mahogany partition wall from the original Mardi Gras, the room will be a fun walk down memory lane for Carnival fans.

Carnival has carried a jaw-dropping nearly 100m passengers over 50 years, so there are a lot of them.

'This is a really nice way to continue the rich history and all the fun and experiences from the past 50 years' as Carnival wraps its 50th birthday celebration in 2022, President Christine Duffy said as she announced The Golden Jubilee during Seatrade Cruise Global together with its champion, Glenn Aprile, director, newbuilds product development at Carnival.

On hand was journalist, ocean liner historian and historic preservationist Peter Knego, from whose Midship Century collection many items were sourced.

'It's really a dream come true,' Knego said. 'This is a dream that took 20 years to realize. I'm so happy.'

Located on Deck 6, in the same spot as The Brass Magnolia on Mardi Gras, The Golden Jubilee will incorportate artwork, memorabilia and original pieces from Carnival’s earlier vessels throughout the space. 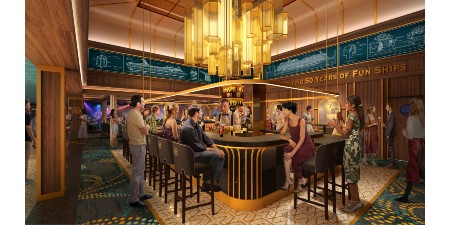 A 120-foot mural has reproductions of blueprints, including some hand-drawn Joe Farcus designs

The bar/lounge has two-deck-high ceilings adorned with a multi-piece brass chandelier and surrounded by a 120-foot mural with reproductions of blueprints depicting the evolution of the Fun Ships, including some hand-drawn designs by world-renowned architect Farcus.

'His drawings were architectural but also works of art,' said Aprile who, as a sixth grader, sailed on Carnival Fascination with his family and became an ardent Carnival fan and, eventually, employee.

And reproductions of Farcus sketches will be blended into mirrors, offering a glimpse into special Carnival moments like Carnival Fascination’s naming ceremony (Farcus's wife Jeanne, was the godmother) and Carnival Inspiration’s first transit of the Panama Canal.

The Golden Jubilee will have chairs recreated from Carnivale’s Riverboat Lounge — inspired by ones in Knego's collection and, he noted, dating back to the ship's 1955 birth as Empress of Britain — paired with cocktail tables from Carnival Fascination’s Hollywood Boulevard adorned with signed sketches representing movie classics by the iconic caricaturist Al Hirschfeld.

An original 17-food by seven-foot, full-height etched glass, nickel and mahogany partition wall with 24 windowpanes from Mardi Gras’s casino will separate the bar from the promenade.

Decorative etchings of musical instruments and polished brass and glass nightclub doors from Carnivale will frame one of the lounge’s entrances.

Floor tiles surrounding the bar feature a stylized maple leaf pattern reminiscent of the design motif from the Grand Ballroom on the original Mardi Gras that carried over from the ship’s former life as Empress of Canada for Canadian Pacific Line.

Mirror inserts integrated into the bar front and bottle display are inspired by the etched glass inserts of Carnivale’s main lobby doors.

There will also be round windows, reminiscent of the portholes on the original ships Fun Ships, and a stage for live music and a dance floor.

'It will be a beautiful, classic, more traditional space, really celebrating that you're on a cruise ship,' Aprile said. 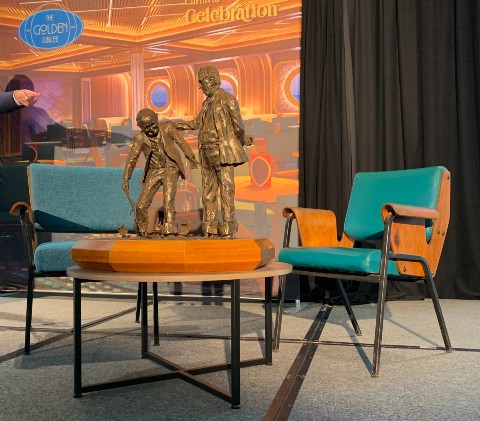 A bronze statue of Carnival founder Ted Arison and Finnish shipbuilding giant Martin Saarikangas, given as a gift from Kvaerner Masa-Yards to the line at Carnival Sensation's 1993 delivery, is also part of the memorabilia.

The specialized bar menu, created by Eddie Allen, VP beverage operations for Carnival, will take patrons on a journey through time, featuring an early version of Carnival's logo introduced in the ‘70s, and the most popular cocktails throughout the decades. Offerings will include classic and vintage cocktails such as a Harvey Wallbanger and Tom Collins.

The adjacent promenade will also provide a look through Carnival’s history via a porthole gallery installation containing three-dimensional dioramas for each of the five decades of the company and one representing Carnival today with a look to its future.

From Knego's collection, there will be an original vintage engine telegraph from 1955 installed on Carnivale and permanently set to 'full ahead' as a symbol of Carnival’s momentum.

Coins for every ship in the fleet, past and present, will be embedded into the promenade’s floor design, and a model of Carnivale, recovered from Carnival Inspiration will be positioned at the entrance to the Carnivale Restaurant.

Pool deck and new neighbourhood highlight Royal Caribbean’s Wonder of the Seas
May 09, 2022