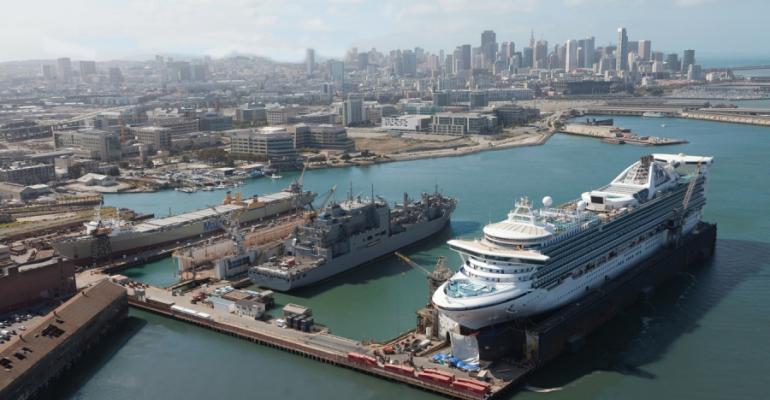 The San Francisco Port Commission executed a new 20-year lease agreement with BAE Systems for maritime ship repair that will sustain San Francisco’s 150-year tradition of shipbuilding and repair. The agreement includes a provision that could extend shipyard operations through 2045.

BAE Systems San Francisco Ship Repair currently leases the port’s Pier 70 shipyard and two floating drydocks under a 30-year lease, set to expire in December 2017. The shipyard has made a successful transition over the past 20 years, since the Bay Area military base closures in the early 1990s, to being highly competitive in the commercial ship repair markets. As a result, BAE Systems and the port crafted a new lease agreement that will sustain industrial ship repair into the future.

'Today we proudly continue one of San Francisco’s oldest maritime traditions, a tradition that has been creating and maintaining quality maritime jobs for more than a century,' announced Monique Moyer, the port’s executive director. 'BAE Systems and the port have collaborated to expanded West Coast drydocking capabilities, servicing post-Panamax ships, providing emission-free electrical power to the ships and deepening the shipyard’s channel entrance to accommodate large ships.'

Moyer added this agreement 'fortifies our alliance to sustain this industry for decades to come.'

BAE Systems employs an average of 250 skilled workers year-round, representing 10 local trade unions, plus additional jobs during peak periods, where employment levels can rise to more than 1,000 people. San Francisco’s most marketable features in the ship repair business are its two floating drydocks and its central-coast location, which makes it ideal for both northbound and southbound migratory cruise and tanker fleets.

The San Francisco Port Commission, at their meeting on March 24, unanimously approved a new long-term lease with BAE that established a 20-year lease term that began April 1, with two five-year extension options.

Other elements include setting up a shared dredging fund among the port, BAE Systems and the Army Corps of Engineers that will deepen the publicly accessible channel at the entrance to the shipyard and lead the way for federal maintenance dredging in the future.

In addition, the port and BAE Systems will pursue possible funding opportunities for the replacement of the port’s post-Panamax Drydock #2.