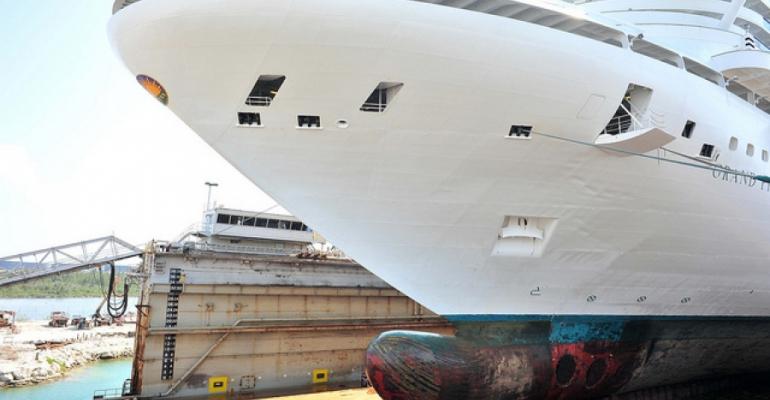 Today Grand Princess began the most significant ship transformation in Princess Cruises’ history, and viewers can follow along with a daily video journal chronicling the 24-day drydock.

Hosted by Grand Princess cruise director Martyn Moss, the videos, as well as photos, are available at princess.com/granddrydock and on YouTube and Flickr.

In the first installment, viewers get a look at the 1998-built vessel as it arrives at Grand Bahama Shipyard. The journal will include daily updates through May 4.

One of the most significant aspects of the docking is likely to be the removal of Skywalkers Nightclub, the iconic public room that rises high above the aft superstructure of the ship. The nightclub is being taken off to improve fuel efficiency.

During the docking, approximately 1,400 workers will be busy around the clock adding many of Princess’ trademark features, including a Piazza atrium and a Crown Grill steak house and seafood restaurant. Several new spaces will also be created including a tea lounge and library called Leaves, a full-service pizzeria, Alfredo’s, and a new nightclub, The One5, on Deck 15.

Also part of the renovation will be the addition of seven new suites, a remodeled casino, boutiques and art gallery, enhancements to the Horizon Court, Lotus Spa and wedding chapel, and the addition of Crooner’s Martini Lounge.

Princess decided to offer the daily video journal in light of the great interest in its photo journals of previous drydocks, according to evp Jan Swartz.

The newly renovated Grand Princess will debut on May 5 in Fort Lauderdale to begin a trans-Atlantic voyage to Southampton, the ship’s summer and fall homeport.