Queen Anne’s art and interiors: inspired by Cunard’s past but designed for the future 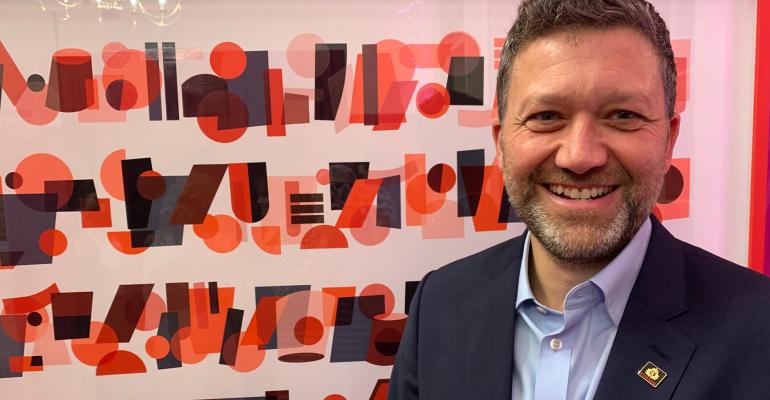 Under construction at Fincantieri’s Marghera yard, Cunard’s Queen Anne will debut in May 2024 with a contemporary collection of over 4,300 artworks and sculptures.

More than 3,000 artists and designers are involved in the project and 500 different framing methods will be used across the ship to display the works.

A small selection of works by eleven of the artists featured in the onboard art collection were displayed in London on Wednesday evening as part of an immersive experience for invited guests and media.

Combining up-and-coming and established artists, the eclectic selection of paintings, photographs and graphic prints are all inspired by Cunard’s past.

Examples include a specially-commissioned photographic piece inspired by Cunard’s golden era of transatlantic travel by London-based conceptual still life photographer Aaron Tilley. The artwork features vintage Cunard artefacts from crystal sculptures to jewellery and 1936 cardboard model of Queen Mary. This Tales of Cunard piece will be displayed in the Princess Grill suites.

Queen Anne’s Pan-Asian restaurant will feature a series of artworks by Susumo Kamijo which re-interprets Japanese artistic traditions from a contemporary point of view.

A kinetic artwork by Callum Simmons evoking the view of the sky from an ocean liner will feature in the staircases on Queen Anne, as will a piece entitled Red Umbra by London born illustrator Tor Ewen who has created an art piece based on Cunard’s iconic red as part of the curatorial collaboration with graduates from the Royal College of Art.

‘Many of the artists and design team spent time looking through the Cunard archive which is held at the Liverpool University Archives trawling into brochures, posters and ship’s logs just absorbing the history of Cunard for inspiration,’ Angus Struthers, SVP Cunard told Seatrade on the sidelines of the exhibition.

Talking of the Queen Anne’s interiors, Struthers commented: ‘The brief was never to replicate one of the existing ships or a Cunard ship from the past but to take inspiration from our past such as the geometric patterns, the colour schemes, or from the design of a chair and create something that will define our next chapter.’

Struthers explained: ‘When we were reviewing all the designs and mood boards we had to always check: where is the reflection of Cunard as we want our guests to get onto Queen Anne and say “this feels Cunard” from the architecture, from the design, and  get that sense of occasion and the grandeur.’

Interior-wise many signature spaces from across the fleet will also appear on Queen Anne such as the Queens Room, Commodore Club, Golden Lion pub, the Royal Court Theatre and Grand Lobby as well as Grill Suites and Britannia state rooms. ‘But they are being reimagined  with modern twists while staying true to the hallmarks of our brand,’ said the SVP.

Struthers revealed there will in fact be two libraries onboard – ‘one traditional and one more of a space to relax and read a magazine.’

But as far as the art goes Struthers did reveal that It’s not going to all be contemporary – ‘there will be some classic pieces’ such as signature oil paintings of ships current and past.

‘We are evolving as a brand...any brand with heritage has to maintain its core essence but needs to evolve and that does not mean it has to rip everything up and start again but we want  guests to get onboard and feel this is a  Cunard ship but  we have multiple  opportunities such as in the art and the entertainment where we can show progression.’