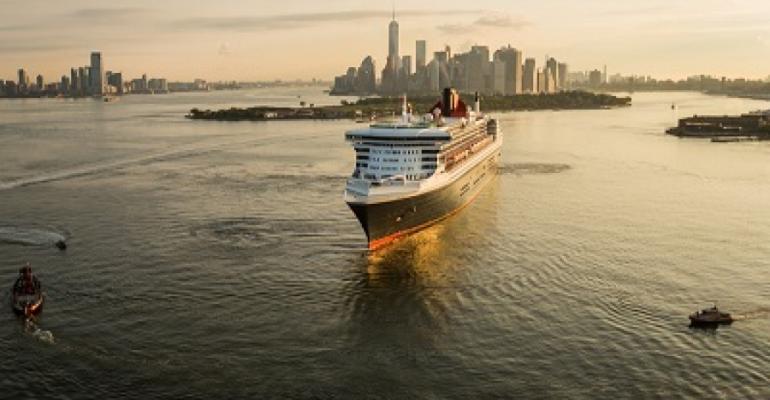 A major, 25-day drydock is planned for Queen Mary 2 in 2016 that will add 15 single staterooms, 30 Britannia Club staterooms and 10 more kennels for pets.

Rick Meadows, president of Cunard North America, called the docking 'a big commitment.' He announced the news during a Tuesday night party at Battery Gardens to watch Queen Mary 2 sail away after an eventful day of Cunard 175th anniversary celebrations in New York.

Both the single rooms and the additional kennels got applause.

The docking will take place May 27 to June 21 at Blohm+Voss.

Meadows noted the existing kennels for up to a dozen dogs or cats are 'always sold out.' The kennel expansion will include 'a proper lamp post and a fire hydrant' in the dog-walking area, he added, so that dogs from either side of the pond will feel equally at home. (This was previously a feature of the kennels on Cunard’s former flagship, QE2, and was first introduced on board Queen Mary at the suggestion of the Duke of Windsor.)

An increase in multigenerational groups—grandparents, parents and children—often means that  one member of the family is traveling as an individual. The liner's first single staterooms will accommodate this trend and serve solo travelers as well.

Passengers booking the new Britannia Club staterooms will be able to dine at a time of their own choosing in the dedicated Britannia Club restaurant, which will be expanded.

Further details about plans for the refit will unfold over time.