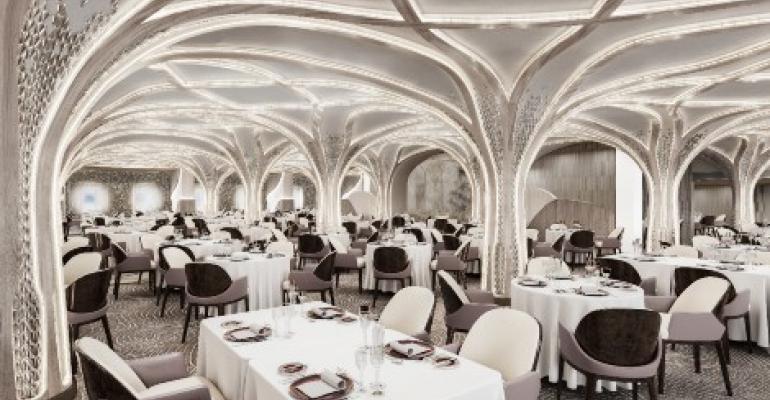 'We are immensely proud that by the end of 2023 we will have welcomed a sixth member to the world’s most luxurious fleet. It’s a testament to the expanding demand for luxury cruising that the Regent brand is driving thanks to our perfectly sized ships offering unrivaled space at sea,' said Jason Montague, president & CEO of Regent Seven Seas Cruises.

He unveiled the name and a first look at the Compass Rose design in a video.

The 55,254gt Seven Seas Grandeur will carry just 750 passengers, providing among the highest space ratios and staff to guest ratios in cruising.

Inaugural season deployment will be revealed and reservations will open Sept. 22.

'Restaurants on board all Regent ships are exquisite, but for Seven Seas Grandeur’s Compass Rose we wanted to create a space that was truly a feast for the eyes,' said Yohandel Ruiz, founding partner, Studio DADO. 'This new design of Compass Rose will pique guests’ curiosity and sense of wonder before they have even set foot in the restaurant, and go on to delight with a sumptuous, personalized meal in dramatic and beautiful surroundings. It’s a dining experience that they will regale friends and family with time and again.'

Outside the restaurant is a delicate, cascading waterfall sculpture fashioned with laser-cut metal and hand-blown glass. Inside, diners will be greeted by a canopy of interwoven crystal and wood-edge illuminated trees arching overhead, giving the impression of dining in an enchanted forest.

As the sun goes down and dinner is served, thousands of individually placed crystal-faceted leaves encrusted on the pillars and branches enveloping the restaurant, floor to ceiling, will be illuminated. A star-dusted view of the ocean is also provided by hundreds of twinkling lights surrounding the windows.

Adding to the atmospheric dining experience will be a custom-designed mural by Confluent Studios. Crafted with gold-leaf and Verre Eglomisé, the mural will depict the flora and fauna at the forest’s edge making the restaurant appear endless.

Ruiz continued: 'Our goal was to create a space that is magical and transformative which, much like Compass Rose’s menu, has the potential to delight guests with something new each time they dine.'

Diners are able to customize their entrée from a selection of preferred sides, sauces, pastas and main features such as Black Angus filet mignon, New Zealand lamb chops, Maine lobster tail and king sea scallops. The restaurant also has daily changing specials, as well as a wide vegan and vegetarian menu.