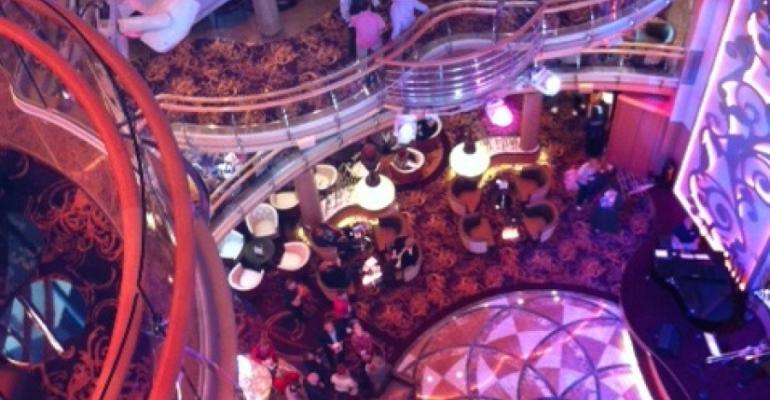 Brilliance of the Seas arrived in UK port of Harwich Tuesday from a three week, $30m drydock in Cadiz, Spain with a host of new dining concepts, entertainment options, carpets and soft furnishings throughout.

The atrium of Brilliance of the Seas has also been reconfigured and transformed into a chic airy space, featuring a range of daytime enrichment activities, nightly entertainment and Centrum WOW, a high-flying entertainment experience where aerialists will perform throughout the 9 deck high atrium space. The Centrum's Champagne Bar has also been unveiled as a new venue - the R Bar - featuring a 1950s vibe, complete with signature cocktails and live band.

Tuesday evening Brilliance sailed on an overnight cruise to nowhere with around 660 passengers onboard (who opted to join the vessel ahead of its first post-refit revenue cruise - a 12 night Russia and Scandinavian sailing departing Harwich today) and more than 1,200 trade partners taking part in a variety of training exercises around the new onboard features.

Since 2011, 14 of Royal Caribbean International's ships have undergone extensive refurbishments which have seen the addition of several of the popular features originally introduced on the Oasis-class duo. The $300m fleet-wide revitalisation will be completed by the end of 2014, explained Jo Rzymowska, avp and general manager UK & Ireland, RCI, Celebrity and Azamara, onboard Brilliance last night.

Kicking off its summer season sailing from Harwich, Brilliance of the Seas offers a range of 11-, 12- and 13-night Scandinavia and Russia sailings, taking in ports of call including Stockholm, Sweden; Helsinki, Finland and St. Petersburg, Russia.

In addition Celebrity Infinity(out of Harwich) and Celebrity Eclipse (ex Southampton) bring the number of Royal Caribbean ships dedicated to the UK market to five. 'We have grown our ex-UK passenger capacity by 100% from last summer with the arrival of Adventure of the Seas,' Rzymowska told Seatrade Insider. 'Interesting is the growth in the number of British passengers cruising with us out of Harwich,' she added. 'They now represent around 30% of embarkations whilst the remainder originate predominantly from North America whereas from Southampton 95% of those sailing are Brits.'