'Revolution' shows Celebrity is more than a one-ship wonder 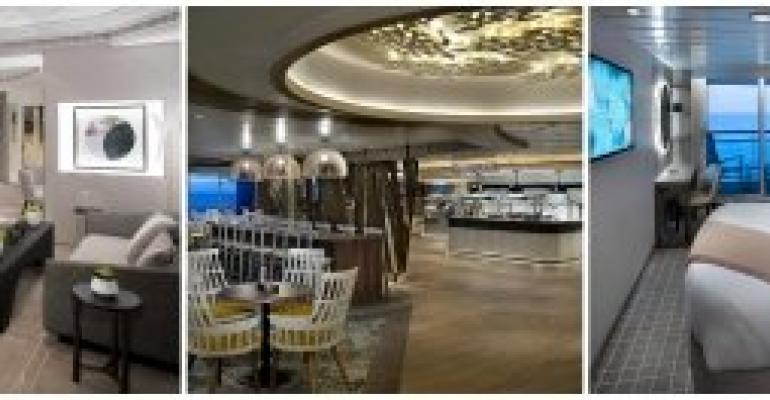 Celebrity Edge debuted to great acclaim but no line can float on a single ship so Celebrity Cruises is updating its fleet to the tune of $500m. The latest to emerge transformed in 'The Celebrity Revolution' is Celebrity Summit.

The 2001-built vessel underwent a 38-day docking at Grand Bahama Shipyard, and Celebrity president and CEO Lisa Lutoff-Perlo is showing off the changes to media on a cruise from San Juan.

'[Our approach is] how can we elevate the entire fleet so Edge doesn't get all the attention?' she explained.

The design changes were inspired by Edge, however different colors and furniture distinguish Summit. The work touched most every area though, according to Lutoff-Perlo, 'The big, big, big news is the staterooms.'

All were completely redesigned. Hirsch Bedner Associates (HBA) took on the standard rooms, while famed British designer Kelly Hoppen—who was instrumental in the look of Celebrity Edge—refreshed the suites and created exclusive suites area The Retreat.

Accommodations gained Celebrity’s eXhale bedding with its luxurious cashmere mattresses. Bathrooms were redesigned with the latest finishes and fixtures, and all stateroom doors were installed with RFID lock technology for digital key access.

Other changes include reimagined restaurants, bars and lounges, a redesigned spa and casino and new boutiques featuring hot designers like Shinola, John Hardy and Hublot.

The Sunset Bar was restyled to provide a variety of seating options for alfresco dining or cocktails with a view. And the Rendezvous Lounge, which hosts events and entertainment from day to night, gained a newly enlarged cocktail bar and a quiet reading nook for curling up with a book.

A new, semi-private consultation area in the fitness center was created for personal training and consultations. A new salon provides services like a blow-dry bar and luxury manicures and pedicures.

A sleek and sophisticated new design for The Casino was created in partnership with HBA, while the Casino Bar was redesigned to provide one of the most exciting places aboard to celebrate. The latest slot machines were introduced.

In another change, high-speed Xcelerate Wi-Fi was enabled all throughout the ship.

Even crew areas are getting attention in the form of new cabin televisions, mattresses, carpeting and a new crew bar. This springs from Royal Caribbean's 'Thank You, Thank You Bonus' to reward all employees after the company, in 2017, achieved its three-year 'Double-Double' goal of doubling earnings per share and a double-digit return on invested capital.

'Since the beginning of 2018, further investments have gone into crew areas to ensure we're modernizing and upgrading the crew areas just like the guest areas,' Lutoff-Perlo said. 'We will continue to do that.'

This is not the first time Celebrity's existing ships have undergone significant updates.

'When we introduced Solstice, we also went back to the Millennium class and did a first round,' Lutoff-Perlo said. 'Every five to 10 years, the design world changes. The look and feel changes.

'As you design new ships,' she added, 'it's very important all ships in the fleet retain a consistency in look and feel but also in the experiences offered. We also look for new partners and ways to elevate the experience.'

ABT and Daniel Boulud partnerships

Summit will become the first ship to feature Celebrity's new brand partnerships with American Ballet Theatreand chef Daniel Boulud. These experiences will 'probably show up on Edge last,' Lutoff-Perlo said. 'Summit is first, then Equinox and Millennium when it arrives for the Alaska season.'

'A brand in revolution'

Summit's renovation follows Celebrity Millennium's early this year during its 35-day docking at Sembawang Shipyard in Singapore. 'She is just beautiful,' Lutoff-Perlo said. Next in line for The Celebrity Revolution is Celebrity Equinox, in May. Six more ships are to be 'revolutionized' by 2023, four of them in 2020.

Apart from refurbishments, Galápagos newbuild Celebrity Flora is scheduled to arrive in six weeks, and Edge sister Celebrity Apex will be coming a year from now.

All told, Lutoff-Perlo said: 'It's a brand that's undergoing a revolution.'