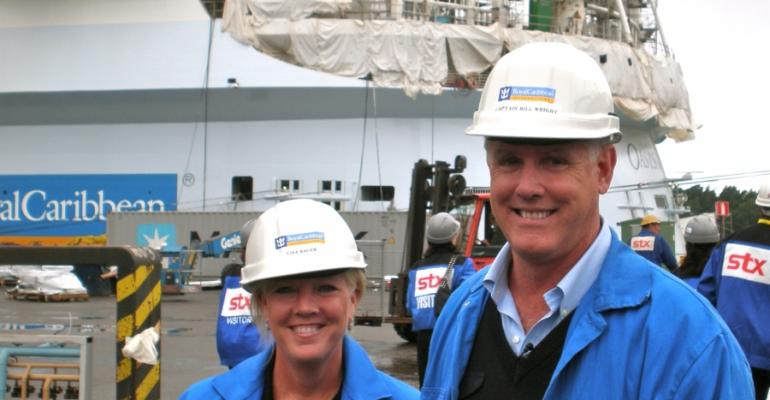 Bauer (left) - Revitalizations will result in a 'virtually brand-new fleet'

Royal Caribbean International said it will up its investment in fleet revitalizations to approximately $300m to spread the latest innovations across the fleet and introduce the highest guest-rated programs from its Oasis-class ships.

The revitalizations include a greater variety of dining and entertainment options, pervasive Wi-Fi, iPod docking stations and more amenities, and come during a period when Royal Caribbean is not introducing new tonnage.

Following Allure of the Seas’ delivery in late 2010, the next new ship scheduled to join the fleet will be the ‘Project Sunshine’ prototype in fall 2014.

The ‘Royal Advantage’ revitalizations announced today are planned through 2014.

Each ship will enter drydock for approximately a month and emerge with new dining venues, entertainment options and technology enhancements.

‘We are thrilled that the ongoing Royal Advantage revitalizations will result in a virtually brand-new fleet that offers the most contemporary experience, no matter which ship or itinerary vacationers choose,’ said Lisa Bauer, svp hotel operations for RCI.

Among the improvements will be pervasive Wi-Fi, interactive flat-panel televisions in staterooms and electronic mustering. Digital wayfinding systems will provide information about on-board activities, real-time updates, customized directions and routing, as well as ship factoids—all at passengers’ fingertips with new plasma and LCD touch screen signs.

Outdoor LED video walls will be installed on the pool decks, and Royal Babies and Tots nurseries for babies 6 months through 36 months will be added. New accommodations are planned, too, including staterooms for families.

Among the additional dining options will be Chef’s Table, an exclusive experience co-hosted by the executive chef and sommelier for an intimate wine pairing dinner of five courses; Izumi, a pan-Asian restaurant with a sushi bar and hot-rock cooking; and the Chops Grille steak house.