Royal revitalizations—‘Now our best ship is every ship’ 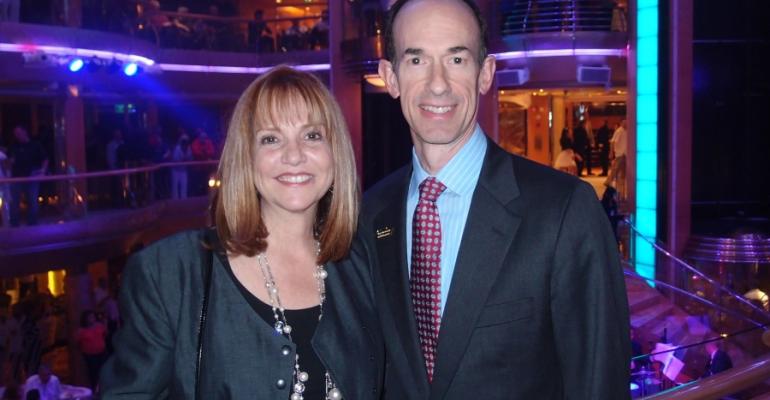 Showing off Grandeur to US agents - Freed and Goldstein

Snow fell in the Centrum of Grandeur of the Seas on Wednesday evening in Miami as aerial acrobats transformed the space into a show named ‘Seasons.’ The new Izumi Asian-fusion restaurant in the Viking Crown Lounge was busy, and the retro R Bar at the base of the Centrum was packed.

On board were 1,512 travel agents and their guests, Crown & Anchor Society members and media, to get a taste of Royal Caribbean International’s $300m program to add Oasis-class features to its Radiance-class and Vision-class ships.

‘Our goal is to make sure the fleet has consistency and to deliver some of the features and amenities guests value the most on our newer ships,’ RCI president and ceo Adam Goldstein told Seatrade Insider. The overnight cruise was the company’s ‘first opportunity to show people on the East Coast of the US what we’ve done.’

Royal Caribbean shaved one revenue night from Grandeur of the Seas’ itinerary as the ship ended a trans-Atlantic cruise in Miami en route to Panama for the winter in order to demonstrate to the trade and some top customers what the company means by saying ‘Now our best ship is every ship.’

Illustrating the immensity of the program were blue T-shirts with that tagline worn by check-in staff and doled out to guests that listed 18 ship revitalizations beginning with Radiance of the Seas in May 2011 and stretching through Jewel of the Seas in 2016. (The figure includes Freedom, Liberty and Independence of the Seas, plus the five Voyager-class ships, which will likely push the total refurbishment budget to $500m, according to Kevin Douglas, vp technical projects-newbuilds.)

The opportunity to make this capital expenditure springs from the unusual four-year hiatus of no newbuild deliveries for the Royal Caribbean brand ‘and also because we’re so proud of the features of the new ships,’ Goldstein said. He expects a pay back in both higher ticket and on-board revenue.

Goldstein described reactions from agents aboard the revitalized Grandeur of the Seas as ‘absolutely superb.’

As Vicki Freed, svp sales, trade support and services, overlooked the Centrum, a stream of agents approached to say ‘Great ship!’ and ask for photographs with her.

Freed said retailers’ reactions centered on the new specialty restaurants—Izumi, Giovanni’s Table, Chops Grille, Park Cafe inside the Solarium and the Chef’s Table—as well as the Centrum’s ‘wow entertainment.’ She summed up the changes as ‘more choices.’

Other additions include a Royal Babies and Tots Nursery, a Concierge Lounge for Crown & Anchor Society Diamond Plus and Pinnacle Club members and suite guests, new touch-screen wayfinding systems, pervasive Wi-Fi and a giant poolside movie screen. An updated color palette replaced the original blues and neutrals with richer jewel tones, such as the purple carpet accented with gold in the Centrum and main stairwells.

‘This is my favorite place on the ship,’ said Floridian Omar Huntley, who sipped a chocolate martini at the R Bar where live music ranging from a soloist to a nine-piece orchestra to a dance combo performed throughout the evening. In his view, this trendy themed bar and additions such as Izumi with its sushi bar are selling points for the ship that will attract younger people.

Douglas told Seatrade Insider the results for the 1996-built Grandeur of the Seas show ‘it doesn’t matter how old the ship is. We can always reinvent.’ He pointed to the underused Viking Crown Lounge that was reinvented by adding Izumi and the Concierge Lounge. ‘It’s a great use of the space,’ he said.

‘What was great for me was to see the Centrum with performers,’ Douglas added. ‘We have this volume, this space, which is an evolution from the Njål Eide design. In this day and age, you have to make more use of the space.’

Douglas said the revitalization project is a combined effort by various departments including that of Kelly Gonzalez, associate vp fleet design and newbuilds, and the entertainment group under vp Pete Compton.

During the overnight sailing, Douglas had team members on board including Dominick Flores, who is overseeing Serenade of the Seas at Navantia Shipyard in Cadiz, where the Grandeur work was completed in June, and Brett Vitols, who will manage Enchantment of the Seas’ revitalization at Grand Bahama Shipyard, beginning Dec. 1.

Going forward, the company will use a three shipyard strategy for the revitalizations, with vessels in Europe heading to Navantia, those in the US to Grand Bahama Shipyard and those in Asia to Singapore’s Sembawang, Douglas said, citing the advantages of lessons learned, continuity for contractors and the investment made in training yard workers.

Shortly before midnight aboard Grandeur of the Seas, a pair of bejeweled chandeliers descended from the top of the Centrum to the dance floor. In each, a woman decked in a white gown and white fur hat poured champagne for passengers who posed for pictures. This event takes place with the captain’s welcome aboard party on regular cruises.

Flanked by Capt. Trond Holm and his senior officers, Goldstein toasted the revitalized ship, thanked travel agents and Crown & Anchor Society members and acknowledged the crew and everyone involved in what he called the ‘extraordinary effort’ that transformed Grandeur in less than 30 days—an accomplishment, he noted, that was backed by shoreside colleagues ‘who worked for about two years to make this happen.’ Goldstein praised Douglas and his team for ‘a marvelous job.’

The RCI chief noted that all six Vision-class ships and all four Radiance-class ships are being revitalized, with nine of the 10 to be completed by next September.

Grandeur of the Seas will sail from Colón, Panama, until April then reposition to Baltimore to take up year-round cruises starting in May.