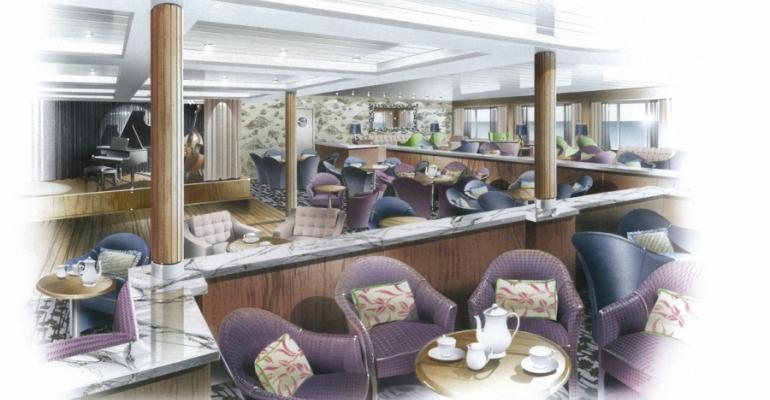 In just under a year Saga Sapphire will set sail as the latest ship in Saga Cruises' fleet.

Currently sailing as Croisieres de France's Bleu de France, the ship continues to be operated by Royal Carribean's French brand chartered until November of this year. It was originally launched in 1981 as Europa for Hapag-Lloyd.

Following hand over to her new owners Saga, specialising in travel for the over 50s, the vessel is slated for a multi-million pound refurbishment in what is described by the UK line, 'as contemporary and eclectic, with a British twist.'

Highlights will include the addition of a new balcony deck, and a re-design of all public spaces including The Drawing Room and The Pier, which will have a British seaside feel, with fish and chips and ice cream parlour.

Additionally, an open air cinema and hot tubs will be added into the mix. In a first for the company, i-pads and onboard wi-fi connection will also be available.

Saga has been working in close collaboration with London-based designers RPW Design, specialising in the luxury hospitality industry and boasts The Langham Hotel and Gleneagles as recent refurbishment projects. The company previously completed the redesign of Spirit of Adventure, also owned by Saga group.

The main dining room will be themed around the seven continents and called Pole to Pole. The Grill will focus on lighter meals offering passengers the opportunity to select their meat or fish cooked to order in a new kitchen.
East to West will be an Asian speciality restaurant.

There will be a variety of bars and meeting places. The Clubhouse will be a relaxing social venue for passengers to meet, while Coopers will be a bar themed around classic British comedians featuring live comedy shows.

Saga Cruising ceo, Robin Shaw said, 'Saga Sapphire will be transformed during the refurbishment works and deliver some truly unique designs - whether this be The Drawing Room, which combines innovation, comfort with exceptional panoramic views, or The Pier with its British seaside theme - all delivered in a stylish and contemporary way.'

Saga Sapphire’s inaugural cruise on March 26, 2012 is a 23-night itinerary departing Southampton to the Mediterranean with stops in El Ferrol, Palma Majorca, Valletta, Dubrovnik, Venice, Corfu, Civitavecchia, Gibraltar and Lisbon, before returning to the UK.

Other itineraries include a 5-night mini-cruise to Ireland and Guernsey, a 7 night voyage to Norway from Dover in May and a 31-night cruise departing in November 2012 to the Caribbean.