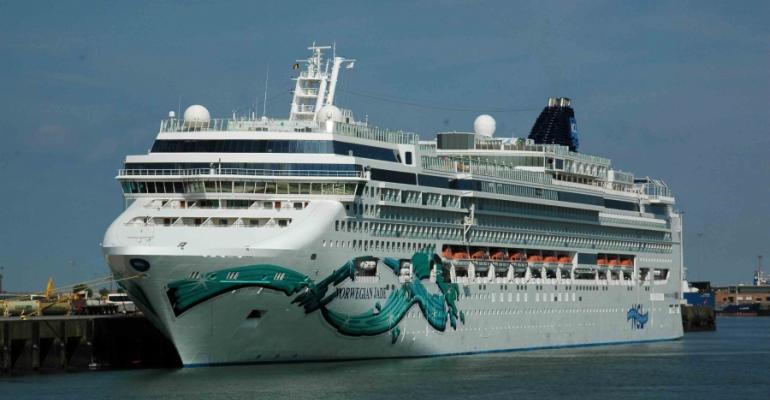 Genoa-based repair yard San Giorgio del Porto has scored a major coup for its recently acquired Marseille operation with the arrival of Norwegian Jade for a €2m restyling. The work is expected to be completed in the first week of December.

The contract is particularly significant for San Giorgio since it represents the first that it would not have been able to handle at its Genoa home. Indeed, the company bid for and won the Chantier Naval de Marseille concession in 2010 precisely because of the constraints of space in Genoa and its need for more expansive facilities to handle the behemoths now joining the world’s cruise fleet. The Norwegian Cruise Line vessel also becomes one of the largest cruise ships ever to have been repaired in Marseille, according to port officials.

The 294mtr, 93,500gt Norwegian Jade will undergo maintenance on its propellers and a silicon paint job as well as other work. The vessel will be housed out at the Marseille yard’s number eight dock, which is 320mtr long and 50mtr wide. It will be the yard’s 23rd repair and maintenance project this year for total revenues of €10m, 70% from cruise ships.

The latest contract comes at a promising time for San Giorgio del Porto, and for luxury cruise builder T. Mariotti, its sister company in the Genova Industrie Navali (GIN) holding. San Giorgio is also handling the extensive restyling of Costa Crociere’s 18-year-old Costa Romantica, a €90m-plus job that is now under way.

Costa has discussed the contract in terms of creating almost a new ship – it will be renamed Costa neoRomantica - and it includes the addition of 111 new cabins, taking the total to 789 and the capacity of the vessel from 1,697 passengers to 1,800, as well as the extensive remodelling of the interiors of the ship.

Costa is also considering whether to put Costa Classica through a similar makeover. Interviewed in Genoa last week, GIN executives declined comment on their chances of winning this second order, but industry sources suggested that if Costa does go ahead, the company will be in pole position to secure it.

Separately, the company is also bidding on the Carnival Group’s massive Destiny project, which could see as many as 10 older vessels from across the fleet go through a similarly extensive refurbishment starting in 2013.

While conceding that the company is an outsider in the bidding alongside the giants of European shipbuilding, San Giorgio chief executive Ferdinando Garre’ also argues that, with Carnival looking to break up the orders among several bidders, and the Marseille yard quite capable of handling larger ships, the company might still look to the outcome with optimism.

T. Mariotti supremo Marco Bisagno was also optimistic for the future, despite the travails of the global economy and the difficulty of competing with the export finance capabilities available to French and German rivals. He noted that the economic crisis has understandably introduced a note of extreme caution into negotiations on newbuilding contracts, but said the company’s low cost base means it remains competitive as the world’s luxury cruise shipping companies ponder the timing of their next expansion move.