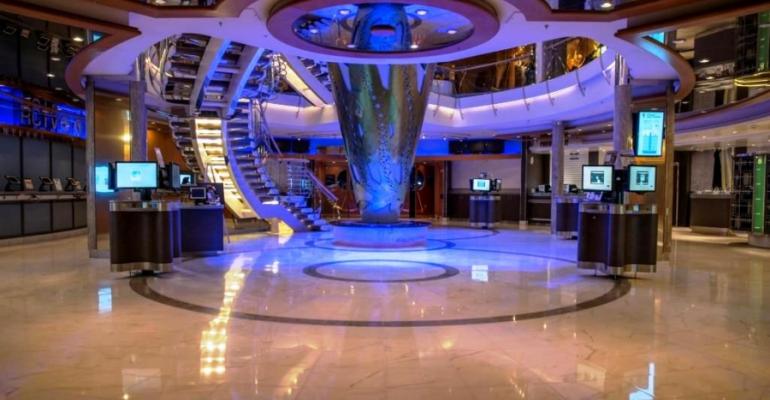 Navigator of the Seas - retrofitted with a modern folder and digital kiosk system (pictured around an atrium) that saves space, making room for 10 additional revenue-earning cabins

Concessionaire The Image Group has just completed the simultaneous drydock conversions of the photo galleries on board Disney Wonder and Navigator of the Seas to the modern folder and digital kiosk system in a bid to save space, increase cruise line revenue and improve the customer experience.

As part of its recent docking at Grand Bahama Shipyard, Disney Wonder gained a folder system similar to that installed last year aboard Disney Magic. This makes Disney Cruise Line the first to offer only the new folder system, since Disney Dream and Disney Fantasy entered service with them.

The Navigator gallery refurbishment shows the potential of the solutions Image is creating well beyond the basics of running a photo service on board cruise ships, according to Image md Brynley Davies.

'Traditional photo galleries take up quite a bit of space and often the location and layout of that space is defined by the needs of having gallery panels that require significant lateral wall space,' Davies explained. On the Voyager-class ships, the photo gallery is located in an area at the bottom of the aft atrium between the dining rooms and the ice skating rink and uses the starboard side of the ship for most of the photo display panels.

By converting to the folder system and photo kiosks on Navigator of the Seas, Image was able to consider other locations and agreed to moving the photo gallery into the base of the adjacent atrium where it has more visibility and passenger flow.

'The bonus to RCI is that we are using less space than before and by our moving into this previously little used space they have been able to locate 10 cabins into the area we have vacated. This win-win strategy shows that our photo technologies have significant additional benefits over and above offering guests new digital products as RCI will earn significant additional revenues from these 10 cabins over the long term,' Davies told Seatrade Insider.

Navigator of the Seas was the first of five Voyager-class ships that are scheduled for revitalization.

As Image progresses and introduces a new generation digital photo system later this year, the company expects to be able to offer even more flexibility in reducing its photo gallery footprint whilst increasing the number of products and services it offers.