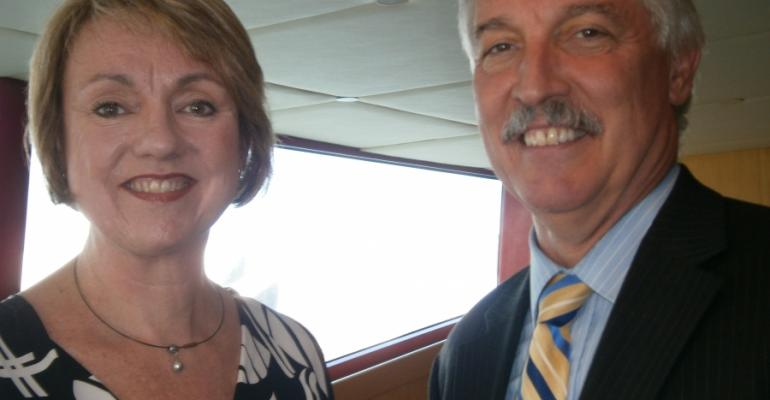 Haworth-Charlton and Doyle aboard Sydney 2000

Capt. Trevor Haworth, who founded CCC in 1970, sold the Australian operation to Adelaide-based private company SeaLink Travel Group in August 2011, but kept CCC Fiji which is now run by his daughter, Jackie Haworth-Charlton.

Over drinks and canapes as the vessel sailed around Sydney Harbour on a perfect evening, SeaLink’s head of sales and marketing worldwide, Richard Doyle, told journalists the company is reinvesting in CCC.

Doyle said over the next 12 months SeaLink will spend more than A$1m refurbishing the purpose-built 120-passenger paddlewheeler Murray Princess, based in Mannum, 84km east of Adelaide.

He said the majority of Murray River cruise passengers are domestic, with a growing number from the United States and the UK and 25% from New Zealand since the introduction of direct flights to Adelaide. Around 50 to 60% are repeat travellers.

A highlight this year will be a four-night cooking cruise with Australia’s first MasterChef winner, Julie Goodwin, departing Mannum June 10. Passengers have the option to extend this to a seven-night cruise that visits the region between Walkers Flat and Murray Bridge and includes a tour to the Barossa Valley and its wineries.

Doyle said SeaLink has discontinued the long-running two-night weekend cruise around Sydney Harbour and along the Lane Cove and Parramatta Rivers from Friday evenings until after lunch Sundays.

Haworth-Charlton said CCC Fiji’s inaugural 11-night round cruise to the Lau Island group from Port Denarau on October 22 this year has been a complete sell-out.

‘The Yasawa Islands are a wonderful destination for our passengers from the Northern Hemisphere, but many Australians and New Zealanders have been there,’ she said, adding that some passengers have sailed with the company 16 times since it was launched in 1996.

Haworth-Charlton said the October 22 sailing is the ‘first ever’ to Lau. Another ‘Discovery Lau Cruise’ departs Denarau on April 22, 2014.

‘Passengers will cruise through some of the most picturesque islands in the world where there is fantastic diving, snorkelling and fishing, along with river rafting, hiking and visits to local villages,’ she said.