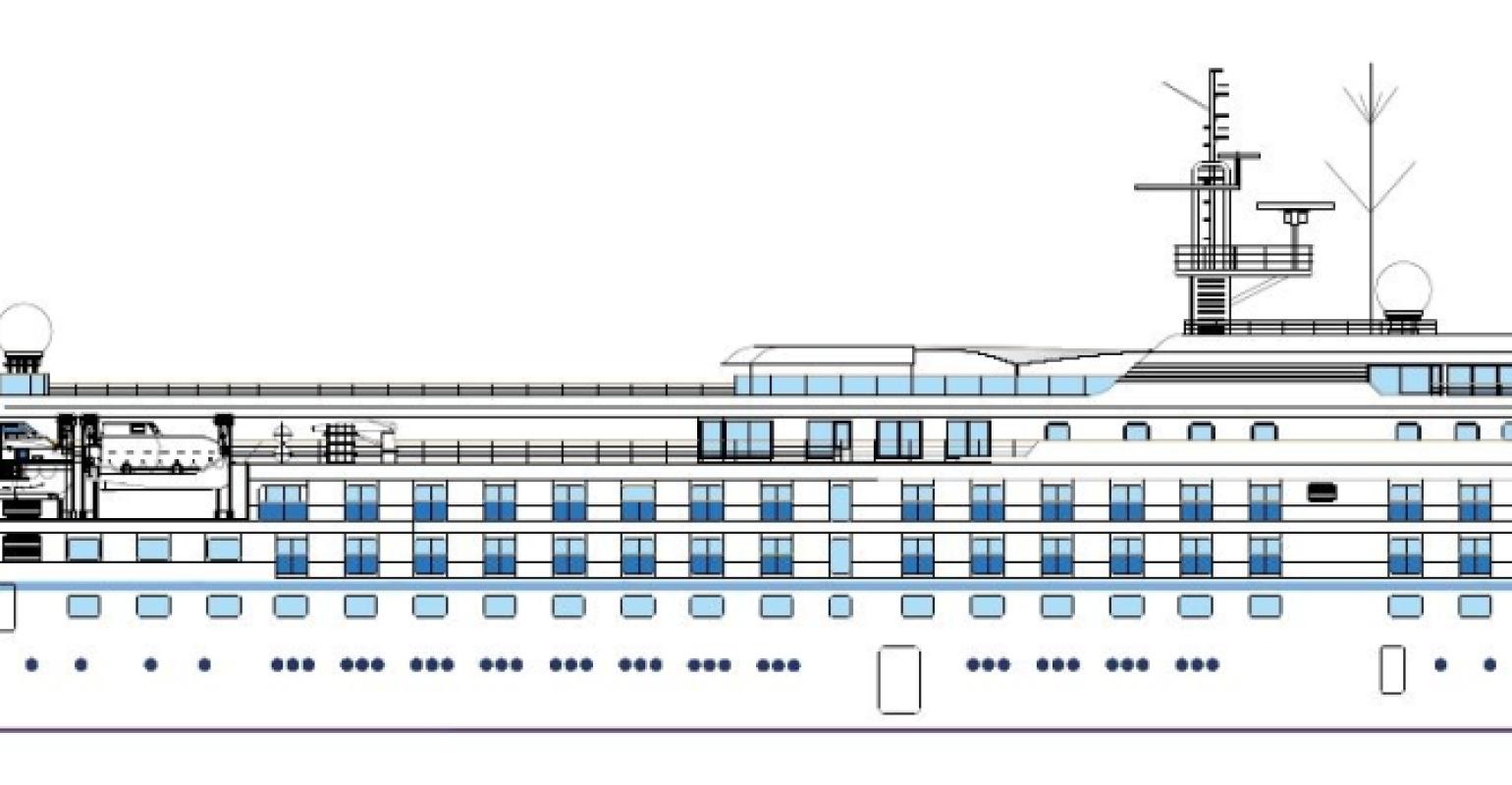 Sleek new profile - Each ship will be lengthened 25.6 meters, bringing the total length to just over 159 meters (click on rendering to enlarge)
Windstar Cruises is going to lengthen and upgrade Star Breeze, Star Legend and Star Pride in a massive project that will add 50 suites per ship, re-do all accommodations and expand dining choices, the spa, fitness center and pool deck. Further, a re-engining will make the ships far more fuel efficient while adding 4 knots to the cruising speed, opening new destinations for Windstar like New Zealand and Spitsbergen in the Arctic.

Starting October 2019 at Fincantieri in Palermo

The $250m 'Star Plus Initiative' will 'stretch' the ships in succession, between October 2019 and November 2020, at Fincantieri's Palermo yard.

Each ship's capacity will go from 212 to 312, so the project represents an overall capacity increase of 24% for Windstar in a year's time—much faster and less costly than if the brand built a new ship. Gross tonnage will go from 10,000 to 13,000.

Windstar president John Delaney told Seatrade Cruise News that building or lengthening had been considerations for parent company Xanterra for some time, and that lengthening 'made so much more sense,' especially given the limited yard capacity for newbuilds.

With larger ships, Windstar can offer more dining experiences, an expanded pool and outdoor deck space, a bigger and better spa and fitness center and two new owner's suites, one with three bedrooms and two balconies—unheard of in ships this size.

A new midsection will lengthen each vessel approximately 25.6 meters, bringing the total length to just over 159 meters.

'There is no place we go today that we won't be able to go tomorrow [after the lengthening],' Delaney said, including transiting the Corinth Canal and up the Guadalquivir River to Seville. This is critical since Windstar markets its ability to reach many smaller ports that are inaccessible to larger vessels. Plus, the expanded passenger capacity—312—is consistent with its current largest ship, sailing vessel Wind Surf's 310.

Delaney said Windstar passengers' most requested destination is New Zealand, but due to the ships' speed, that would entail too many sea days. And the line would love to branch out to Spitsbergen as part of Norwegian fjords itineraries. The 4 extra knots of speed will make both additions possible. And Delaney pointed out that the brand's Signature Expeditions program of Zodiac and kayak adventures, which debuted in Alaska, would be ideal for New Zealand's fjords and the Norwegian Arctic.

Moreover, with low-sulfur fuel regulations coming into play, the use of more costly MGO will be spread across a larger passenger base, keeping fixed costs per available lower berth day down. With the re-engining, each Star ship goes from seven engines (four for propulsion, three for hotel load) to four. The Wärtsilä engines will be more efficient and, therefore, more environmentally friendly.

The 50 new suites per ship will include new categories and open-floor-plan configurations. In a change, the bed will be near window and the lounge area at the entrance, giving a more open feeling. Two new, larger owner's suites include one that combines with neighboring suites to create up to a three-bedroom, two-balcony suite.

All suites will get new bathrooms—with a more modern look replacing the white marble—and those with balconies will have new sliding doors.

Ray Chung, director of design at The Johnson Studio at Cooper Carry in New York, is creating the modern design aesthetics for the new public spaces and new suites. Princess Cruises veteran John Gunner, VP of expansion projects—who recently joined Windstar after a consulting period—is instrumental in the project.

Ship staff and crew areas and accommodations will be expanded and upgraded. Additional crew will be hired and the increase will maintain the line’s high 1.5:1 passenger to hotel staff ratio.

The project is expected to be partially financed through an export credit facility guaranteed by Italy's SACE.