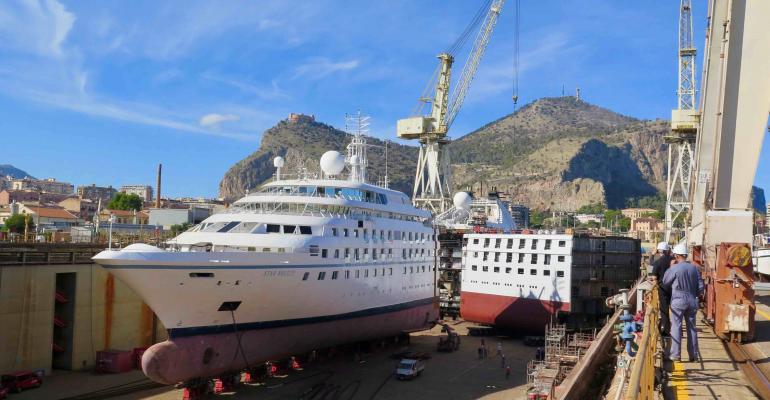 Star Breeze in the dock at Palermo the day its new midsection was inserted, in October

After tests detected asbestos in the machinery spaces of Star Breeze, the ship’s ambitious lengthening and re-engining at Fincantieri’s Palermo yard has been delayed.

Work halted while the asbestos is being removed, so the ship’s completion, set for Feb. 11, was put back to May 4. The first sailing was rescheduled to May 25. Booked customers and travel agents were notified Thursday afternoon.

Sister ship Star Legend, which had been due for completion June 28, has a new date of Aug. 30, and its first cruise will sail Sept. 5, while Star Pride will be finished just a matter of days later, on Nov. 29 instead of Nov. 16. It will embark passengers Dec. 6.

Star Breeze was sliced in half and its new midsection inserted in October. Prior to the re-engining, Fincantieri conducted an asbestos survey that found a ‘limited number of asbestos-containing components’ in the engine room and mechanical spaces.

‘Almost all of it was found in gaskets between pipes in sealed spaces so it didn’t present any risk to workers,’ Windstar Cruises President John Delaney told Seatrade Cruise News.

Fincantieri hired S.A.I.T. S.p.A., an independent certified asbestos abatement contractor, to remove the asbestos and that’s nearly done, Delaney said. However, during this time, workers could not be in the engine area so that delayed the re-engining.

The original seven engines are coming out of Star Breeze. Going in are four Wärtsilä 26 diesel engines that meet the highest (Tier III) nitrogen oxide emissions standards. The ship also will be fitted with selective catalytic reduction converters to further reduce harmful exhaust.

Ships in service tested, too

In addition to Fincantieri’s asbestos survey, Windstar conducted its own hazardous materials testing, a new regulatory requirement, which also detected asbestos in some sealed spaces. Delaney said 300 areas per ship were sampled, ‘a huge number,’ including all passenger and crew areas.

No exposure to guests or crew

‘All were negative results with the exception of the machinery spaces,’ Delaney said. ‘We went one step further and took air samples. All were negative as well. There’s been no exposure to guests or crew.’

Delaney added that asbestos will be removed before Star Legend and Star Pride go into the yard.

‘While we’re disappointed in the delay, we’re still incredibly excited about the project and that the first of the ships will be ready in five months,’ he said.

Star Breeze has been scheduled to resume service in the Mediterranean before crossing to North America for re-inaugural activities March 19 at PortMiami. Now, with the delay, the ship will still head to Alaska in the spring and its re-inaugural is planned for June 28 in Seattle.

Since Windstar’s headquarters are there, shoreside employees will get to take part.

Of the $250m Star Plus initiative, Delaney said: ‘We’re going to have three amazing ships when it’s done.’

For more details on the Star Breeze transformation, see the December issue of Seatrade Cruise Review.