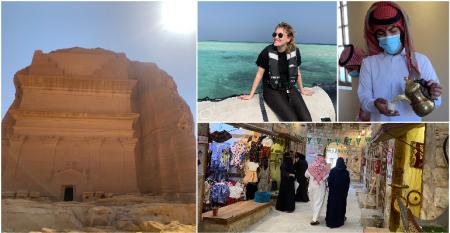 AIDAcosma set to begin Ems River conveyance
Oct 22, 2021
AIDAcosma is expected to depart Meyer Werft in the night from Friday to Saturday for its conveyance along the...

Cruise Saudi continues investment in people and places, as Mark Robinson explains
Oct 21, 2021
Cruise Saudi is working to develop further opportunities for people across Saudi Arabia by helping coordinate the introduction of training programs in the field of tourism and travel.

Scenic's Glen Moroney charts return to Red Sea in the ‘near future'
Oct 21, 2021
Scenic Eclipse will ‘definitely not’ return to Saudi Arabia for the next two years, said Scenic’s Glen Moroney, but would if it were not for the vessel’s confirmed schedules elsewhere, though ‘one of the Eclipses will be [in the Red Sea] at some...

Vitor Alves shares key adaptations made by Scenic for Red Sea sailings
Oct 21, 2021
A banqueting option in all Scenic Eclipse restaurants plus further dining and leisure options were made available during the ship’s summer Red Sea sailings, according to Vitor Alves, director hotel operations, Scenic.

Celebrity charts seven-ship Europe program in 2023
Oct 19, 2021
Celebrity Cruises will be sending all three of its Edge-class ships to Europe in 2023, along with four others.