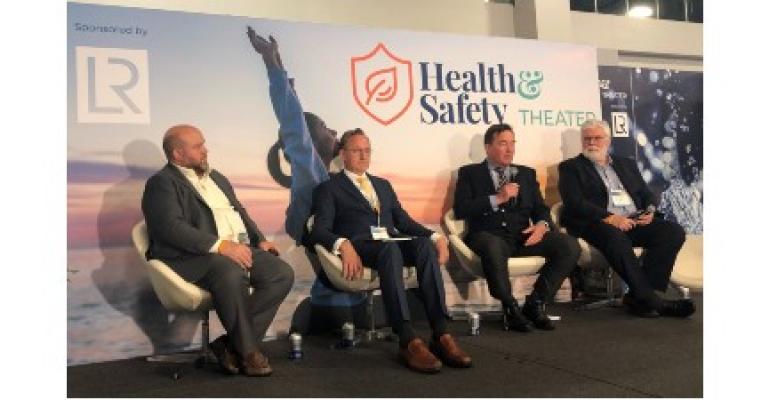 Cruise industry safety initiatives once focused on suffocating fires or insuring stability after a hull breach, but the new frontier will be alternative fuels, a panel of safety specialists predicted at Seatrade Cruise Global.

A host of new fuels are in the wings as cruise lines try to decarbonize and transition away from the bunker oil used in engines for the last hundred years.

Although HFO has produced engine room fires in recent times, it is a known quantity compared to fuels such as liquefied natural gas, ammonia or methanol, not to mention nuclear fission or fusion power.

'There are certain elements of the future fuels that still need to be looked into when it comes to the safety aspect,' said Paal Johansen, SVP & global cruise ship director at DNV.

'Ammonia, hydrogen, everybody talks about that. You cannot just put it aboard a cruise ship without evaluating the risks. So I think that’s key for us going forward,' Johansen said.

Johansen chairs the Cruise Ship Safety Forum, a working group of cruise ship operators, shipyards and classification societies that focuses on safety issues and research. The group did extensive studies of LNG bunkering risks that paved the way for the LNG-powered ships now proliferating in the industry.

Johansen said that going forward one of the tasks for the group will be to recruit new partners and entities with expertise that the cruise industry has yet to tap.

Collaboration is the key

Bud Darr, EVP maritime policy and government affairs at MSC Group, who moderated the panel, credited the safety forum with repeatedly heading off wrong-headed or ineffective regulatory proposals in the safety sector. He said the group can perform the same function with future fuels.

The growing desire to diversify away from fossil fuels has even revived talk about nuclear energy as a future cruise propulsion system. The experts said the dream of nuclear is worth pursuing, but faces major obstacles.

'We’ve looked at nuclear, traditional nuclear fission. My own company, we’ve done studies in the past. I won’t say there aren’t technical challenges. There are. But obviously the biggest challenge has always been societal acceptance,' Strang said.

The vast majority of nuclear ships are naval vessels and they come with a phenomenal safety record, Strang continued. But training a civilian nuclear technical force would be a massive challenge.

At the State of the Industry debate, Carnival Corp. CEO Arnold Donald mentioned the possibility of nuclear fusion as the transformative energy source everyone is looking for. Strang said that there isn’t even a commercial fusion reactor on land yet, much less at sea.

'Our job is to make sure it’s safe,' Strang said. 'We carry the most responsive cargo in the world. Obviously, I’m with Arnold, but it’s a little ways away. Let’s walk before we run, or jump.'

Regardless of the specific fuel, the system is going to have to be safety-proven Strang said. 'We’ve all committed to net zero carbon by 2050. How are we going to get there? The only way we’re going to get there is by having future, alternative, sustainable fuels.

'Safety and sustainability are going to come hand in glove, and that’s really where the opportunities lie,' Strang said.