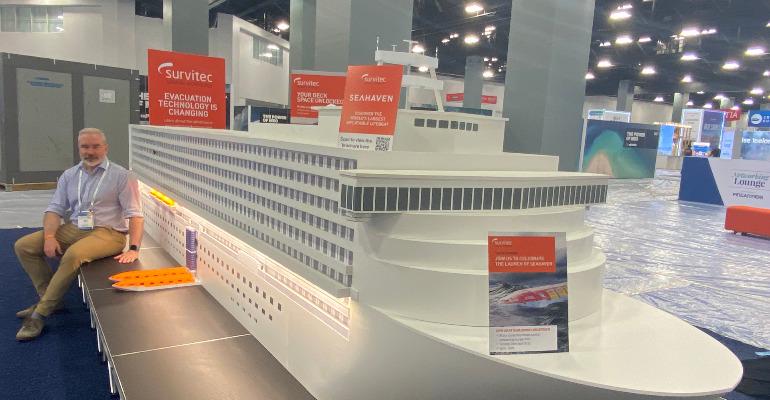 Survitec’s 530-passenger lifeboat Seahaven launched today at Seatrade Cruise Global, promising that by replacing conventional lifeboats, it can free up space and allow obstructed view cabins to be transformed into premium balcony cabins.

At 42t, a pair of lifeboats can accommodate 1,060 passengers and crew and has more excess space in case of emergencies, exceeding the typical 125% capacity.

The product, alleged by Survitec to be the largest lifeboat in the world, has already garnered interest from ‘the big four’ cruise lines, he said. Having liaised with Lloyd’s Register throughout the design and modeling of the technology, the company expects to receive approval in June.

It will be priced according to vessel type and the operator’s specifications.

Stored in containers on each side of the ship, the boats measure nine meters wide and 27 meters long. A single-release button unravels and inflates the lifeboats in four seconds, lowers each one in four minutes and evacuates passengers in 22 minutes. Under International Convention for the Safety of Life at Sea (SOLAS) rules, evacuation should not surpass 30 minutes.

‘The single-action release consists of a button on the bridge or it can be done locally at the station, where the lifeboat is stored. It then rotates the lifeboats, going down to the waterline. They unroll themselves and inflate outwards,’ explained McCormick.

Designed to travel independently for 24 hours at a speed of six knots, it has been tested in challenging conditions as part of Heavy Weather Sea Trials (HWST.) ‘With Seahaven we have taken all the safety features, testing and type approval processes associated with lifeboats and marine evacuation systems (MES) to solve the challenge of being able to evacuate growing numbers of passengers quickly, safely and comfortably… It’s time to move on to enhanced evacuation capabilities.

A 13.6- by 3.6-meter container holds each lifeboat and fits onto a single deck.

Replacing conventional lifeboats and davits, up to 85% of deck space can be reclaimed and reimagined, according to McCormick. The product is being targeted at newbuilds and older vessels requiring upgrades, with McCormick noting, ‘We’ve got a global footprint, we can supply to any shipbuilder.’