2023's LNG-powered Carnival Jubilee to be based in Galveston 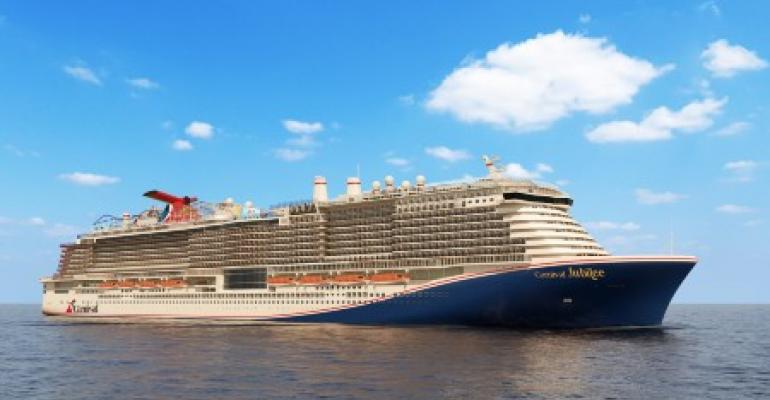 2023's Carnival Jubilee is four times larger than the original Jubilee
Carnival Cruise Line's third Excel-class ship — to be named Carnival Jubilee after an early Fun Ship — will be based in Galveston.

Carnival also confirmed all 22 of its US-based vessels will be back in guest operations by March 2022. Nineteen ships had been confirmed by February, and now Carnival Sensation will restart from Mobile March 5, Carnival Ecstasy from Jacksonville March 7 and Carnival Paradise from Tampa March 12.

'Carnival was the first cruise line to offer year-round cruising from Galveston in 2000, and we have continued to grow our presence and support of the Port of Galveston’s expansion, so we are thrilled to bring our brand-new Carnival Jubilee to Texas and the greater Southwest region,' Carnival President Christine Duffy said.

The ship is the sister of Mardi Gras, sailing from Port Canaveral since earlier this year, and Carnival Celebration, which will be delivered in late 2022 and based in Miami.

Carnival named all three after earlier vessels as it gears up to celebrate its 50th birthday in 2022.

The original Celebration was the first year-round cruise ship at Galveston in 2000 and was soon joined by Jubilee in 2002. Now, just more than 21 years later, this new Carnival Jubilee — four times larger than the original — will arrive.

Duffy announced the news at the annual CruiseWorld travel advisor conference in Miami Beach today. She was joined on stage by a seven-foot cowboy that had been positioned around the convention teasing that 'something big is coming to Texas.'

'Galveston is one of our most popular homeports,' Duffy said, 'and we draw guests to Texas from across the Midwest, Southwest and Western US.'

Two new zones to be revealed

The 182,800gt Carnival Jubilee will have double-occupancy capacity for 5,400 passengers plus 1,700 crew. It will offer the BOLT roller-coaster and a three-deck atrium on the starboard side of the ship that converts to an entertainment venue at night. The ship will also have six zones like its sisters, two of which are new concepts to be revealed at a later date.