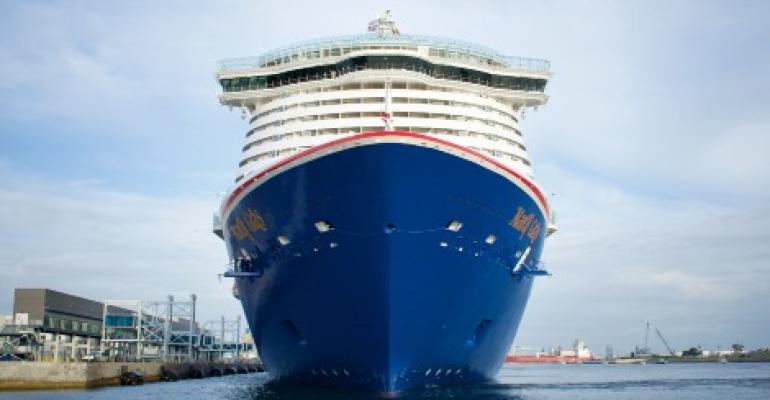 Fifty-two percent of Carnival Corp. & plc capacity is currently scheduled to sail by Nov. 30, including the new Mardi Gras from Port Canaveral

Eight of Carnival Corp. & plc's nine brands have announced plans to resume operations by the end of fiscal 2021, with P&O Cruises Australia the lone exception.

AIDA Cruises and Costa Cruises are already operating, with plans for Carnival Cruise Line, Cunard, Holland America Line, Princess Cruises, P&O Cruises and Seabourn to sail in the US, Caribbean and Europe.

Voyages are announced on 42 ships through the end of the fiscal year (Nov. 30), representing 52% of the company's total capacity across 91 ships.

Further resumptions for the remainder of fiscal 2021 will be announced as plans are finalized.

Carnival will resume with eight ships by the end of August, including sailings from Galveston, PortMiami, Port Canaveral, Long Beach and Seattle (to Alaska). Included in that roster is the new Mardi Gras with sailings Port Canaveral starting July 31.

Princess expects to resume in July with Alaska sailings and a series of cruises in UK coastal waters, as well as cruises from Los Angeles, San Francisco and Fort Lauderdale to the Caribbean, Panama Canal, Mexico, Hawaii and California coast starting in September.

Holland America also plans to start in July with an Alaska program, followed by sailings from Greece in August, and from Italy and Spain in September, as well as voyages to Mexico, Hawaii, the California coast and the Caribbean this fall.

Seabourn expects to begin sailing in July from Greece and Barbados, and to Antarctica starting in November.

Costa resumed operations in May with cruises in Italy and Greece, and is now offering sailings to France and Spain in July, followed by Portugal and Turkey in September.

AIDA began carrying passengers in March to the Canary Islands, in May in Greece and Germany, and is now adding more Germany cruises as well as sailings in Spain, Italy, Portugal and Malta from July, and the Arabian Gulf from November.

P&O Cruises will sail around UK coastal waters beginning in June, expanding to the Mediterranean and the Atlantic coast starting in September.

Cunard will offer a series of cruises this summer around UK coastal waters in July, followed by voyages to the Iberian coast and Canary Islands. In November, Queen Mary 2 returns to service with a combination of trans-Atlantic crossings and Caribbean cruises.

Additionally, Holland America and Princess are offering land-based vacations this summer in Alaska.

Carnival Corp. will provide a business update on Thursday. Watch this space for highlights.