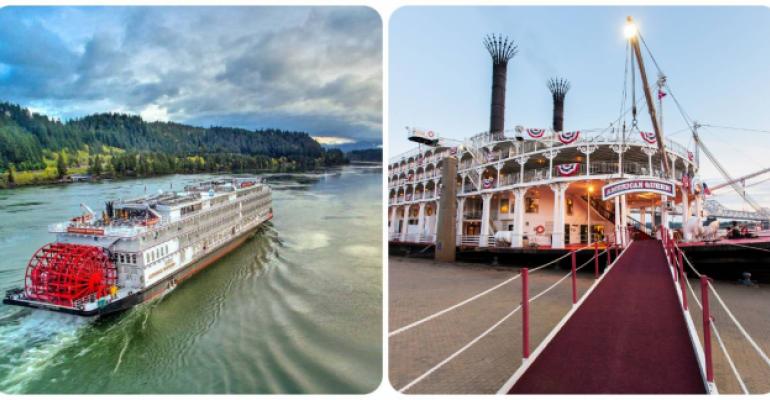 American Empress, pictured left at Oregon's The Dalles, is going to resume sailing June 14 in the Pacific Northwest, while grande dame American Queen is hoped to start in July on the Miasissippi

American Queen Steamboat Co. will be putting a third vessel back into service when American Empress starts to sail on the Columbia and Snake rivers June 14, with American Queen hoped to follow on the Mississippi in July.

American Empress will carry only fully vaccinated passengers and crew — ahead of the company's vaccination mandate for departures from July 1 — in order to satisfy Washington state authorities.

Additionally, AQSC President Shawn Bierdz told Seatrade Cruise News the grande dame American Queen is now expected to resume in July on the Mississippi, thanks to the Centers for Disease Control and Prevention's new guidance. This largest of the company's vessels, with capacity for 436 passengers, is the only one subject to the CDC's conditional sailing order, which applies to vessels carrying more than 250 people (passengers and crew).

Bierdz said there was uncertainty about American Queen until last week when the CDC issued its new guidance, which includes a pathway for vessels where 98% of crew and 95% of passengers are vaccinated against COVID-19.

AQSC has found that 70% of its passengers booked on Mississippi sailings are already vaccinated, and 60% of crew have received their shots with the full contingent expected to be inoculated by the company's July 1 target. Bierdz said about five crew a day are getting shots in a slow ramp-up in case any experience symptoms and don't feel up to working. Most are going to walk-in vaccination sites.

According to Bierdz, there's widespread customer acceptance of the vaccination mandate with only a 'handful' of people who've contacted the company with conditions that preclude them from getting the shots. AQSC isn't making exceptions.

The first American Empress cruise will embark at Clarkson (near Spokane), Washington, and sail to Vancouver, Washington, across the river from Portland, Oregon.

Initially, the vessel will be carrying no more than 166 passengers, 77% of its 215-passenger capacity.

'Following our successful March restart with the American Countess and American Duchess on the Mississippi and Ohio rivers, the added capacity of the American Empress in the Pacific Northwest will help meet the unprecedented guest demand to travel again,' Bierdz said.

The Pacific Northwest season is nearly sold out. One-third of the passengers there came from canceled sailings, while two-thirds are new bookings. 2022 is also selling well.

Even with vaccinated passengers, the company is contnuing pre-embarkation COVID-19 PCR testing as part of its SafeCruise protocols developed with Vikand Solutions. Testing is conducted at the pre-cruise hotel and processed shoreside, with results received before boarding.

AQSC boats also have rapid PCR testing capability, with the swab done ashore, pre-boarding, and the processing on the boat. This can catch, for example, someone who arrives late due to a missed flight.

The company operates 'bubble' excursions, which Bierdz said have been well-received.

Of the 14 cruises completed since March, there have been 'no issues,' according to Bierdz. A person here or there has been denied boarding due to a positive test result but there haven't been COVID cases on board.

As it returns to service, AQSC, he added, is excited to be providing American jobs.

The company, which had to furlough all but 110 of its 600 crew during the pandemic, now has 450 crew back and is recruiting to bring that number up to 600 again.