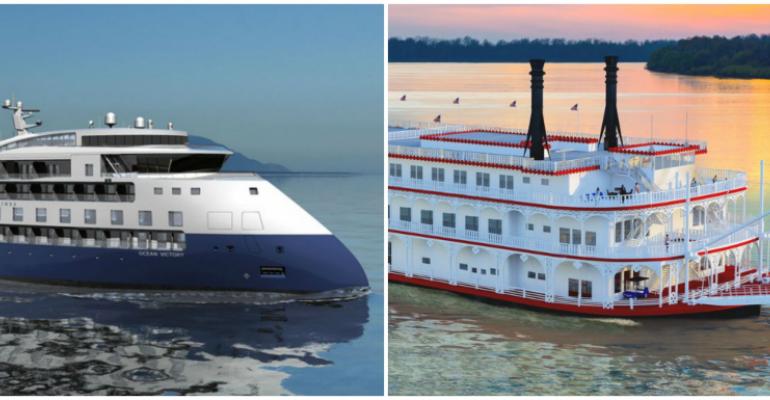 The new, chartered expedition ship Ocean Discoverer, sister of this year's Ocean Victory, will also sail in Alaska for Victory Cruise Lines, while the 2020-built American Countess will be the newest paddlewheeler in the AQSC fleet

The satellite office, in a yet-to-be-determined location, will relocate the marketing, sales and operations team to the cruise industry's epicenter. Executive, finance and all other functions remain in New Albany, Indiana, headquarters.

Sales open earlier than ever

Opening bookings a full two years out is the earliest in company history.

'Cruisers yearn to travel again, as evidenced by 2021 and 2022 inquiries and our webinar popularity with guests and travel partners. Opening up 2023 to satisfy that wanderlust had to be done,' said Kari Tarnowski, SVP marketing for AQSC/Victory.

American Queen, the world’s largest steamboat, will sail the Lower Mississippi route with 28 departures between Memphis and New Orleans. The vessel will also offer a Thanksgiving cruise from Memphis to New Orleans and three New Orleans round-trips over the December holidays.

American Countess, the newest edition to the AQSC fleet, will operate a 'Mighty Mississippi' voyage from St. Paul to New Orleans in September and and sailings along the Ohio, Cumberland and Tennessee rivers throughout the 2023 season.

The boutique paddlewheeler American Duchess will showcase the Ohio River with six cruises between Louisville and the line’s easternmost point of Pittsburgh.

In the Pacific Northwest, American Empress will begin sailing March 23, offering nine-day, one-way voyages between Vancouver, Washington (across the river from Portland, Oregon), and Clarkston (near Spokane), Washington, through Nov. 26, 2023.

At Victory, the chartered expedition ship Ocean Discoverer will debut with a repositioning voyage from Puerto Caldera, Costa Rica, to San Diego, departing May 12, 2023 followed by a season of 11- and 12-day adventures between Sitka and Vancouver, BC, or Sitka and Seattle.

Sailing its third season in the fleet, Ocean Discoverer sister Ocean Victory will operate between Vancouver and Sitka throughout the summer with repositioning sailings to bookend the season between Puerto Caldera and San Diego.

Once again traveling the coastal waters of the US, Canada and the Great Lakes, Victory I and Victory II will chart a course with 11- to 16-day voyages embarking at iconic spots like Chicago’s Navy Pier, downtown Toronto, Detroit and Montréal, and visiting destinations Marquette, Mackinaw Island and Soo Locks/Sault Ste. Marie.

The identical 202-passenger vessels will also visit Southern ports including Savannah, Charleston and Fernandina Beach, plus Victory II will trek as far south as Mexico’s Yucatán Peninsula for round-trip sailings from Cozumel.

Both AQSC and Victory have upgraded their on-board offerings and accommodations for the 2021 season. Included in the fare are beer, wine, spirits and specialty coffees from open bars and lounges throughout the ship, as well as a morning smoothie and juice bar. Culinary programs will feature USDA prime meats and fresh lobster.

Further new amenities include handwarmers and cool cloths on deck and signature culinary treats in cabins. The cruises include a one-night, pre-voyage hotel stay and hop-on/hop-off excursions organized by Shore Excursions of America, recently acquired by AQSC/Victory parent Hornblower Group.