In Asia, restarts from Hong Kong, Japan, Singapore and Taiwan but no clarity on China and Korea 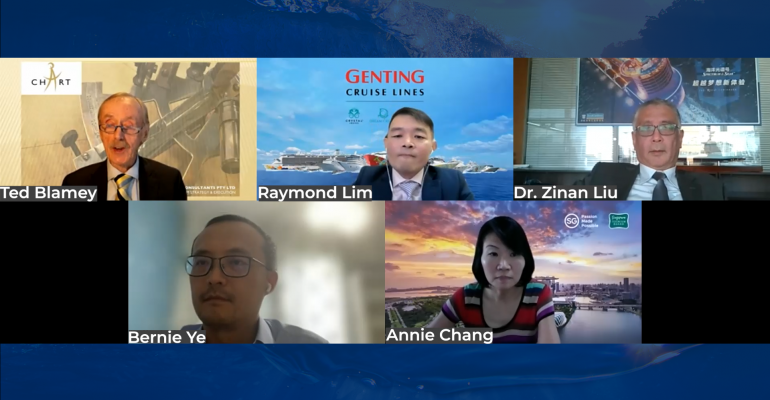 One of four ports in Asia Pacific to restart cruising, Singapore has completed over 220 sailings (by Royal Caribbean International’s Quantum of the Seas and Dream Cruises’ World Dream) carrying more than 280,000 Singapore residents on cruises to nowhere.

‘We are very positive about the future; many of the passengers are new to cruise and have given high satisfaction rates as the cruise industry has proven it is a safe product,’ said Annie Chang, director cruise at Singapore Tourism Board during today's Asia Pacific Demand session at Seatrade Cruise Global 2.0 Power Week.

‘Cruise resumption is all about risk mitigation, not risk elimination,’ Chang added.

Genting was the first cruise line to resume cruises in Asia in 2020 starting with Explorer Dream from Keelung, Taiwan last July, followed by Singapore in November and Genting Dream in July 2021 from Hong Kong.

In mainland China, ‘after 19 months of no cruising there is still no clarity from the government on when international operations might begin,’ noted Zinan Liu, chairman, Royal Caribbean Cruise Asia.

There has been some limited movement in the domestic market, he said: ‘whilst the Viking Cruises and China Merchants Shekou jv using Viking Sun (renamed Zhao Shang Yi Dun) has started coastal cruises, on the other hand Astro Ocean’s Piano Land received a permit to operate cruises to nowhere in support of the Hainan Free Zone but they have no yet commenced.'

Costa Cruises SVP Commercial Bernie Ye concurred. 'We see no signals that international cruising will resume in China just yet; in the meantime the two Costa ships that were transferred to the CSSC Carnival Cruise Shipping jv (Costa Atlantica and Costa Mediterranea) are in warm lay-up in Dubai and can be redeployed to China if cruising gets a green light,' he remarked.

Ye called the deployment of Costa Venezia and Costa Firenze in Europe (instead of China as planned) an ‘intermediate solution’ and once it becomes clear when China and Japan will reopen, 'We can bring the ships to Asia plus we have the first newbuild of the jv CSSC Carnival Cruise Shipping delivering in 2023.’

Liu was asked if South Korea will be back on the menu once China opens? ‘We have been communicating with ports and local and central government about resumption for cruises between the two countries but currently there has been no response as South Korea is concentrating on controlling the pandemic,' he replied.

Liu continued: ‘The Chinese government’s zero COVID stance is a top priority but I think their approach will gradually converge to the Western approach and likely adopt risk mitigation rather than risk elimination. But before that the perceived risk needs to be lower than it is now and it takes a while for the government to change their approach.’

Taiwan has become the fastest growing market in East Asia during the pandemic due to Dream Cruises’ deployment of Explorer Dream from Keelung, as moderator Ted Blamey, principal of Chart Consultants pointed out.

Panelists agreed South East Asia holds the most potential for growth in the short term with work underway to ensure countries such as the Philippines, Indonesia, Malaysia and Vietnam adopt harmonised safety protocols to make it more convenient for cruise lines to reintroduce multiple itineraries once international travel reopens.

‘It is very important we have standard protocols among regional homeports and ports of calls,’ Chang said.

Liu believes Chinese consumers' desire to cruise ‘has not changed’ and international companies' commitment to the market ‘will not change but it will take time to rebuild to 2019 levels.’

All panelists were very hopeful for the future of the Asia Pacific cruise industry and agreed now more than ever the region needs to work together. ‘My best guess is we will see a return to pre-pandemic activity by 2024,’ said Ye.

Register here for a virtual pass to watch the above and other Asia Pacific sessions, as well as the entire program from the Seatrade Cruise Global Miami Conference, on demand and to network.