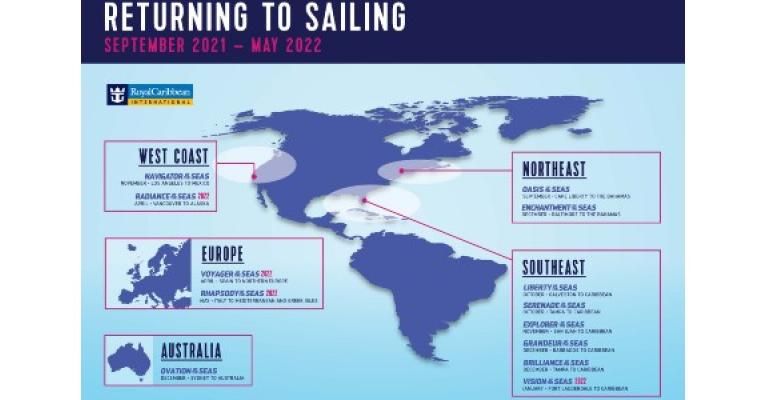 Here's a quick read of some of today’s coronavirus-recovery cruise news and announcements, including ship restarts, new routes and a humorous marketing campaign.

Full Royal Caribbean fleet to be sailing by early 2022

Royal Caribbean International's complete lineup of ships will be sailing by spring 2022. The next group of returning ships and in September with Oasis of the Seas’ first sailing from the New York area (Bayonne, New Jersey's Cape Liberty) with a seven-night itinerary to Perfect Day at CocoCay.

'More than 110,000 guests have cruised with us since December, and they’ve done so safely while enjoying the memorable vacations they trust we’ll bring to life,' RCI President and CEO Michael Bayley said.

The plans for the resumption of all 26 ships add to previously announced Royal Caribbean milestones coming later this year, including the line's return to California and the start of the first full winter season from Barbados.

Oasis of the Seas will sail Sept. 5, becoming the first of the Oasis class to do so. On Nov. 19, Navigator of the Seas will arrive in Los Angeles to begin three-, four- and five-night getaways to Catalina Island and Mexico.

Ovation of the Seas hopes to head back to Australia on Dec. 13 for domestic cruises from Sydney, though nothing has been approved, and Grandeur of the Seas will cruise from Bridgetown, Barbados, on seven- and 14-night sailings as soon as Dec. 5.

The announced ships, return dates and itineraries are here.

Carnival 'Back to Fun' campaign features Shaq in operatic mode

'La Back to Funna' campaign has an opera singer belting out a catchy aria, reminding travelers to 'bring your flippy flops-o and prepare for lotsa splash-o.'

In a separate spot Shaq gets in on the act and lip syncs his own magnum opus, which includes a mention of his new Big Chicken venue on Mardi Gras, his first seagoing restaurant.

'This campaign had to be a massive signal in the sky that Carnival is "Back to Fun" and an over-the-top opera singer — and Shaq, of course — seemed like the perfect way to celebrate this significant moment for our brand,' said Carnival's Jayne Andrews, senior director – brand and advertising.

The campaign will live across the line’s web site, CRM, paid and owned social channels, including TikTok, as well as online videos and other digital media.

Mardi Gras made its maiden call at San Juan, Puerto Rico, and become the first cruise ship to visit in 16 months.

The Carnival ship is on its inaugural cruise that sailed from Port Canaveral Saturday.

Princess Cruises’ Regal Princess has completed its first sailing since the start of the pandemic, returning to Southampton this morning.

Regal Princess departed on a three-night scenic cruise from the Port of Southampton on July 31.

‘The atmosphere on board Regal Princess was electric …’ said Tony Roberts, VP, Princess Cruises UK & Europe. ‘The feedback from guests has been overwhelmingly positive … We would like to thank travel agents for their continued commitment and support to Princess over the past 16 months.’

This followed, by two days, the completion of the line's first cruise following the pause in operations — Majestic Princess in Alaska.