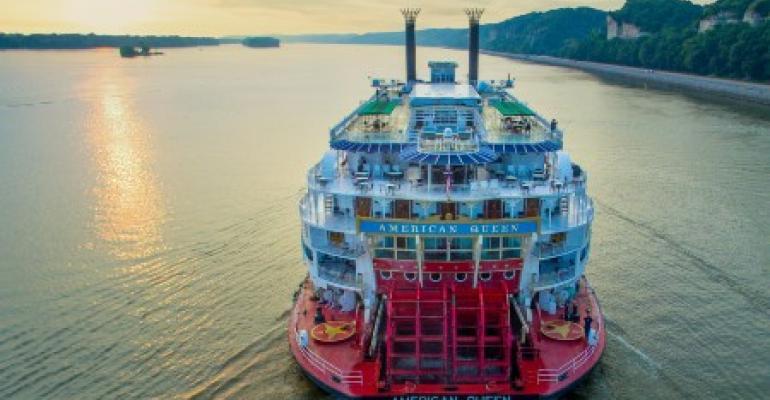 This also marks the 10th anniversary of the company closing on the purchase of American Queen on Aug. 8, 2011, almost a decade to the day.

Here's a quick read of some of today’s coronavirus-recovery-related news, including restarts of vessels for American Queen Steamboat Co. and Windstar Cruises, and Galveston's forecast of cruise calls.

The world's largest paddlewheel steamboat sets sail from New Orleans for service on the Mississippi and Ohio rivers. This also marks the 10th anniversary of the company closing on the purchase of the vessel Aug. 8, 2011, almost a decade to the day.

'Our close-to-home cruise experience resonates more than ever, and I feel such pride seeing how far our offerings have expanded,' AQSC Founder and Chairman John Waggoner said. 'Today the American Queen embarks from New Orleans, the American Empress welcomes guests in Clarkston, Washington; our boutique paddlewheeler, the American Duchess, is docked under the Gateway Arch in St. Louis and our newest riverboat, the American Countess, is calling on Nottoway Resort in White Castle, Louisiana.'

AQSC began a phased restart in March under SafeCruise protocols and from July 1 mandated 100% vaccination fleetwide. American Queen is certified to operate with just over 400 passengers and intially will carry approximately 300.

Four of the line’s six yachts are now back in the water with the next two phasing in through November. All cruises require fully vaccinated passengers and crew.

The Port of Galveston forecasts 128 cruise calls in the second half of 2021, with passenger capacities gradually increasing.

Galveston is looking to full-scale operations in 2022, hosting more than 1m passenger moves.

The port expects to get a big budget and jobs boost in 2022 when its third cruise terminal opens. Royal Caribbean International is building the $110m facility at Pier 10. Macquarie's Ceres Terminals, which is to manage the new facility and provide stevedoring services, holds a 50% stake.

It is forecast to generate more than $7.6m in income for the port in 2023, the first full year it is open.