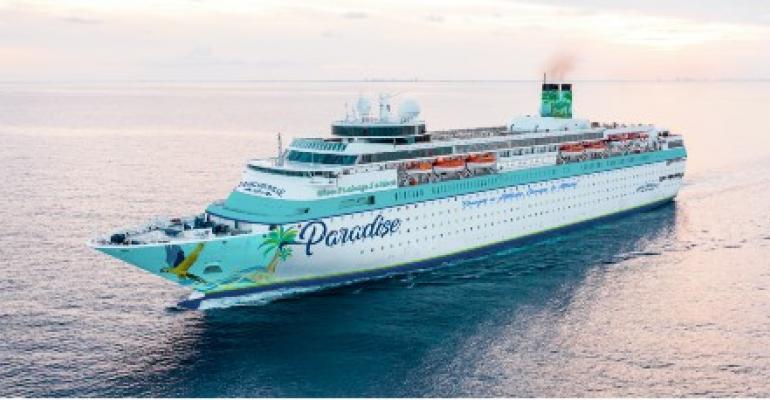 The ship, Margaritaville Paradise, is the former Grand Classica. It's scheduled to depart April 30 on its first cruise from Florida's Port of Palm Beach to Grand Bahama Island.

This will follow a multimillion investment and refurbishment. The ship’s 658 cabins and common spaces will feature Margaritaville’s signature casual-luxe design with subtle nautical details and colors influenced by the sea, sand and sky.

Food and beverage options will include JWB Prime Steak & Seafood, Frank and Lola’s Pizzeria, Port of Indecision Buffet, LandShark Sports Bar and Margaritaville Coffee & Pastry Shop as well as the Euphoria Lounge, Sunset Bar and 5 o’Clock Somewhere Bar. Additionally, the ship will offer activities and entertainment, including the Par-A-Dice Casino, a Stars on the Water Theater, St. Somewhere Spa, Fins Up! Fitness Center, pools, a retail shop and more.

In late November, Bahamas Paradise said it was taking Grand Classica out of service for a three-week drydock at Grand Bahama Shipyard.

'We’re excited about this new partnership as we launch Margaritaville at Sea out of the Port of Palm Beach. We are incredibly proud of what we’ve built at Bahamas Paradise Cruise Line and are appreciative of our loyal customers and trade partners who have stood by us through so much,' added Bahamas Paradise CEO Oneil Khosa, who will serve as CEO of Margaritaville at Sea.

'We’re excited about this next phase of our evolution, rebranding as Margaritaville at Sea,' he continued. 'The collaborative concept will add a different dimension to the cruising industry, appealing to a new audience of travelers.'