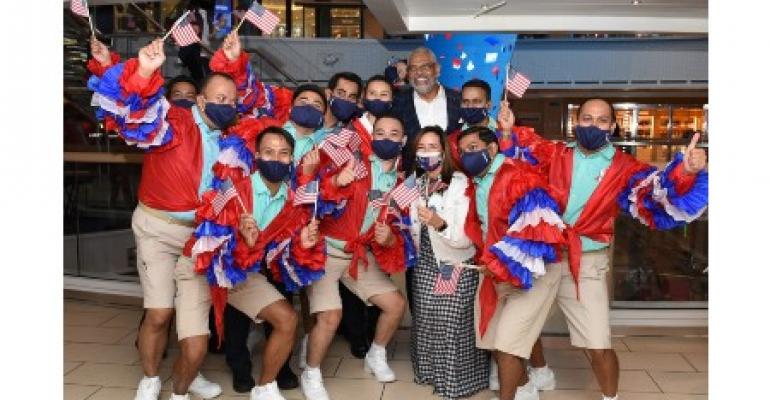 'The Carnival team has done a remarkable job,' President Christine Duffy said in a video update.

11 of 24 ships are in guest operations

Eleven of the 24 Fun Ships — half of Carnival's US-based fleet — are carrying passengers from six US homeports, the most in cruising. Carnival ships are operating from homeports along the East and West coasts and the Gulf of Mexico.

These first three months have demonstrated Carnival's 'strong brand loyalty, the best customer base in the cruise industry and our team’s ability to deliver outstanding results and guest service,' Duffy said Thursday.

'It has been an emotional experience for everyone involved, myself included, as we have resumed operations with a focus on health and safety while providing a positive impact for our guests, team members and the communities we visit,' she added.

Even tougher than repatriating the crew ...

Last year during the COVID-19 shutdown, Carnival repatriated more than 30,000 crew to their home countries.

'As challenging as that process was,' Duffy said, 'it was actually easier than what it has been like to get our crew members back on board and ready for guest operations, which included getting everyone vaccinated, quarantined and trained on many new operations and procedures.'

Since the restart, Carnival has served nearly half a million Guy Fieri burgers and 608,000 beers. BOLT, the first roller-coaster at sea, has had 11,000 riders since Mardi Gras entered service July 31. Some 180,000 shore excursions have been taken across the fleet.

Economic boost for ports and jobs for crew

But it’s more than just burgers, beers and roller-coaster rides. Carnival’s resumption has provided vacations to hundreds of thousands of travelers, a boost to the economies in its homeports and ports of call and opportunities for crew to support their families in 120 countries around the world.

The line plans to have 17 ships operating by the end of 2021, with additional vessels returning in January and February and the entire US-based fleet carrying passengers by spring 2022. Carnival also has two Australia-based ships, which currently are paused until February.