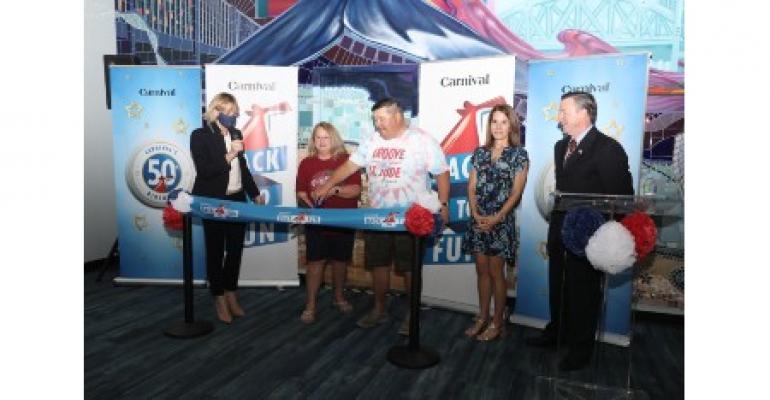 The ship is sailing a five-day Bahamas cruise with calls at Nassau and Princess Cays as part of the first major cruise line departure from JAXPORT in two years. In February,  American Queen Voyages' coastal vessel, Ocean Voyager kicked a series of cruises from the port.

Sarah Beth Reno, VP guest operations for Carnival, and JAXPORT Board Chair Wendy Hamilton hosted a 'back to fun' and 50th birthday event at the cruise terminal, with the first passengers cutting a ceremonial ribbon.

'As a drive-to cruise market with nearly 100 million residents within a day’s drive, Jacksonville offers convenient cruise access for passengers throughout the Southeast US and beyond,' Hamilton said.

Carnival and Jacksonville have had a partnership since 2004 when the line began cruising from JAXPORT to the Bahamas and eventually, the eastern Caribbean. In pre-pandemic 2019, Carnival carried approximately 150,000 passengers on more than 70 cruises from Jacksonville.

Carnival Spirit sailings include four- and five-day Bahamas itineraries. The ship replaced Carnival Ecstasy in Jacksonville for cruises until April 23, at which point Carnival Elation will move to Jacksonville and sail through 2024. Carnival Elation will operate four- and five-day Bahamas itineraries along with seven-day eastern Caribbean cruises.