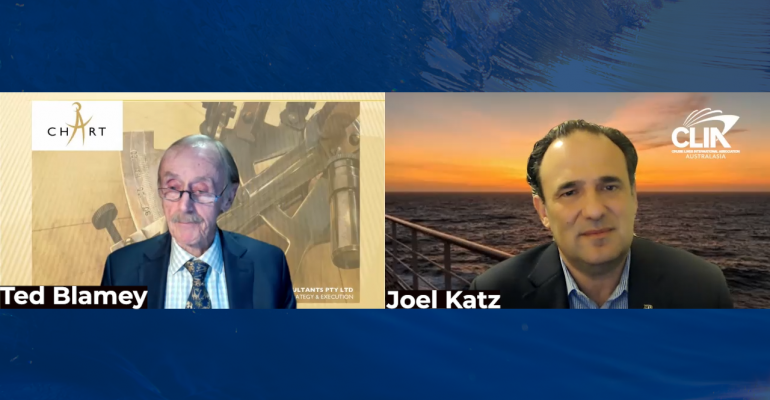 CLIA's Joel Katz providesTed Blamey an update on the situation in Australasia from
Australia and New Zealand (along with mainland China) are the only major arenas where cruise operations have yet to be given the green light. So what is needed to open Australia?

‘In each of those markets where cruising has restarted, and we have recently seen this announced for South America and South Africa,’ it’s about open engagement between the government, the cruise lines and stakeholders,’ he responded.

‘We are saying to the Australian government we need to have this discussion about a pathway forward. Our health authorities are very risk adverse and to give them credit that is why Australia and New Zealand are in such a good position from a covid perspective but at the same time that has made them very nervous about anything that potentially opens an avenue of the virus to get through the border.’

Katz reminded pre-COVID cruising generated $5bn and 25,000 jobs across the South Pacific region. These have stalled. 'The entire South Pacific is a complex mesh supported by the cruise industry so we need to resume to help these communities,' he said.

‘We have some incredible examples from around the world from those who have restarted in a carefully managed way resulting in 2m passengers who have cruised since last year and we are using this data to put before the Australia and New Zealand governments.

‘At the same time it is demonstrating to them that we can bring the ships back into the country without jeopardising the border. Testing and isolation of crew before ships leave, then the journey on route and then testing on arrival. The quarantine will be for more than a month and crew will have had multiple PCR tests on top of being fully vaccinated so there is no risk in bringing those ships into the country,’ he said.

'Slowly we are starting to see momentum grow and the cruise community has generated 50,000 emails to ministers at state and federal levels and members of Parliament,’ Katz shared.

‘There is no reason why we can’t do a restart here.'

Katz noted the government has announced Australians will be able to travel overseas from December 'so they will be able to fly somewhere and go on a cruise but can’t cruise from their own ports.'

CLIA Australasia has taken the government’s plans to reopen Australia for travel and overlaid a four phase plan for cruising but hasn't heard back.

Light at the end of the tunnel

Katz is not disillusioned. He believes there is some light at the end of the tunnel and ‘we see that the pressure from the broader cruise community is starting to have an impact. We are ready to talk about tried and tested protocols and just need the government to sit down with us and listen.’

Register here for a virtual pass to watch the above in full and other Asia Pacific sessions, as well as the entire program from the Seatrade Cruise Global Miami Conference, on demand and to network.