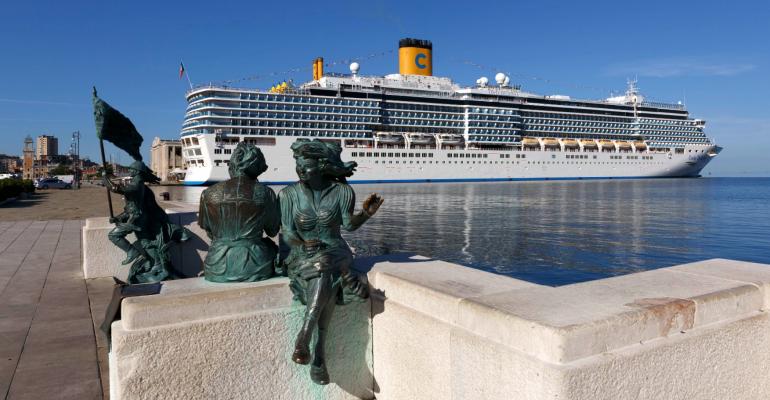 Costa Cruises resumed sailing Sunday as the first brand in the Carnival Corp. & plc family to do so.

Costa did not state how many passengers were embarked or if anyone was turned away during the health screening process but released photos of check-in at Stazione Marittima.

These showed passengers and ground staff in masks, travelers queued up with space between each party, the infrared temperature check, review of health questionnaires, signage reminding people of protocols and numbered seating areas.

Drone footage of Costa Deliziosa's sail-away showed little clusters of people distanced from each other on the open upper decks.

Costa Deliziosa had been in Trieste since Thursday, rehearsing for the embarkation.

After a five-month hiatus

'We’re delighted to be able to welcome our guests on board again after more than five months without cruising and we’re also happy to be restarting operations right here in Italy,' said Michael Thamm, CEO, Costa Group and Carnival Asia.

'For the last few weeks, we’ve been working together with the authorities on implementation of the new health procedures that will allow our guests to make the most of their cruise experience while ensuring maximum safety,' Thamm continued. 'Meanwhile, we’re continuously monitoring the situation with a view to gradually reintroducing cruising on more ships from October, with itineraries extended also to include guests from our other European markets.'

Next up for the line will be Costa Diadema's restart from Genoa on Sept. 19.

'Who would have thought?'

Given that Italy was once an epicenter for coronavirus, the fact that things are getting under way there is encouraging for the global business.

As Carnival Corp. President and CEO Arnold Donald said in a recent interview with Seatrade Cruise News: 'If you go back just two or three months, who would have thought there would be any possibility of cruising in Italy?'

This was yet another significant restart for big-ship cruising, following TUI Cruises from Germany (Hamburg) on July 24 and then from Kiel, July 31; Dream Cruises from Taiwan (Keelung) on July 26; and MSC Cruises from Italy (Genoa), on Aug. 16.