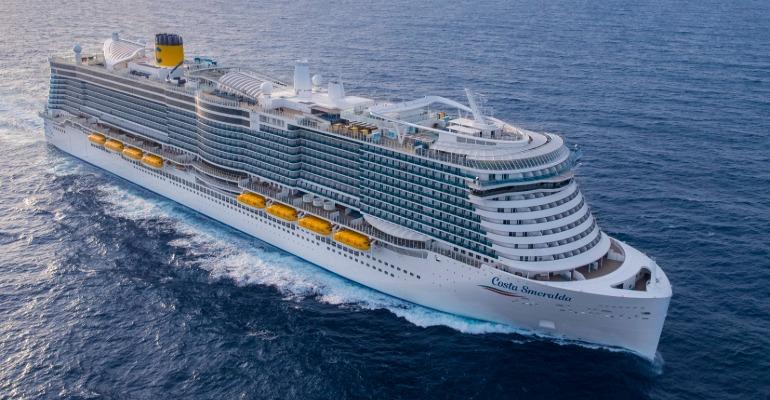 The incident occurred as the vessel was coming alongside

Costa Smeralda hit a crane at Savona port earlier today as it attempted to berth.

A Costa spokesperson said of the incident: ‘During the approach phase on the quay, Costa Smeralda came into contact with a ground crane located in zone 16 of the Port of Savona.'

Although this did not cause any structural damage to the hull, a lifeboat was damaged and fell into the water.

'The boat was promptly recovered and the first checks did not show any other damage to the ship's structures,' the spokesperson said.

Relevant authorities and Costa Cruises staff are at the site.

No injuries to ground or on-board personnel were reported.

Although the ship's ability to operate was not impacted, Costa Smeralda will remain at Savona for repairs to be carried out in the shortest possible time.

The news comes shortly after it was announced that Costa Smeralda would resume sailing on March 13 in Italy, with three- and four-day mini cruises or a seven-day cruise, calling at Savona, La Spezia, Civitavecchia, Naples, Messina and Cagliari.

Cruises originally scheduled for Costa Deliziosa, Costa Firenze and Costa Luminosa between February 1 and March 12 are cancelled, owing to ongoing restrictions imposed by the Italian government, which do ‘not allow guests to enjoy an adequate on-shore experience and the ability to fully explore the itinerary’s destinations,’ as stated by the line.

A revised schedule is to be announced.

MSC Cruises announced this month that it would restart Italian sailings on January 24 with MSC Grandiosa.