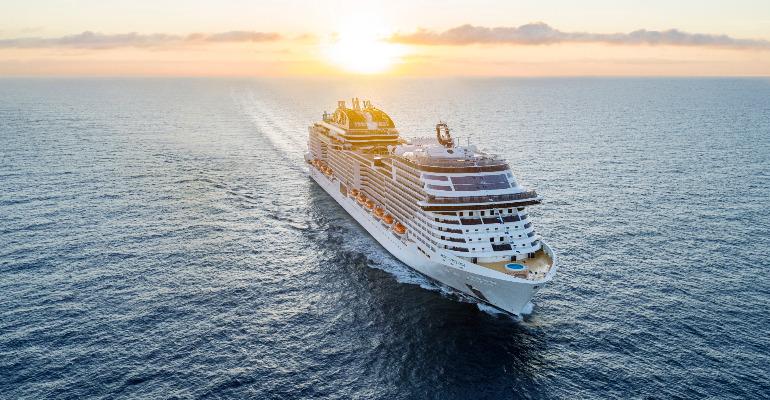 MSC Virtuosa’s naming ceremony will take place at Dubai’s Port Rashid on November 27 – one day ahead of its maiden Gulf voyage – coinciding with celebrations around the UAE’s Golden Jubilee and amid Expo 2020.

‘This event assumes more significance, due to the fact that it is part of the line-up of glorious events and activities taking place for the "Year of the 50th" and coincides with the region’s first World Expo,’ said Pierfrancesco Vago, executive chairman, MSC Cruises. ‘I am so glad that cruising has played – and will continue to play – an important part in this achievement.'

‘We’ve leveraged our city’s world-class transport and tourism infrastructure, including with Emirates’ investment in a dedicated remote check-in facility at Port Rashid to provide cruise operators and passengers the best possible experiences,’ explained Emirates Airline and Group Chairman and Chief Executive, His Highness Sheikh Ahmed bin Saeed Al Maktoum. ‘With seamless sea-air connections and exciting Dubai itineraries during their transit, we look forward to the reinvigoration of cruise passenger growth...’’

His comments were followed by Helal Saeed Almarri, director general, Dubai Tourism who added that the partnership with ‘a cruise line such as MSC Cruises is testament to the global appeal of Dubai’s cruise industry and its position as a multi-faceted tourism destination.’

He went on to add, ‘This milestone event will contribute towards sustaining tourism's momentum and further strengthen the destination proposition, as we continue to open up to the world in a safe and secure way.’

MSC Virtuosa will begin its maiden Gulf voyage on November 28 when it sails the first in a series of seven-night cruises from Dubai. They include calls at the ports of Abu Dhabi and Sir Bani Yas plus Dammam, Saudi Arabia and Doha, Qatar with additional embarkations in both Abu Dhabi and Doha.

The line announced recently that MSC Bellissima would homeport in Jeddah from the end of July, with MSC Cruises working closely with Cruise Saudi.

One of the line’s Meraviglia class vessels, MSC Virtuosa first began sailing in mid-May in the UK.