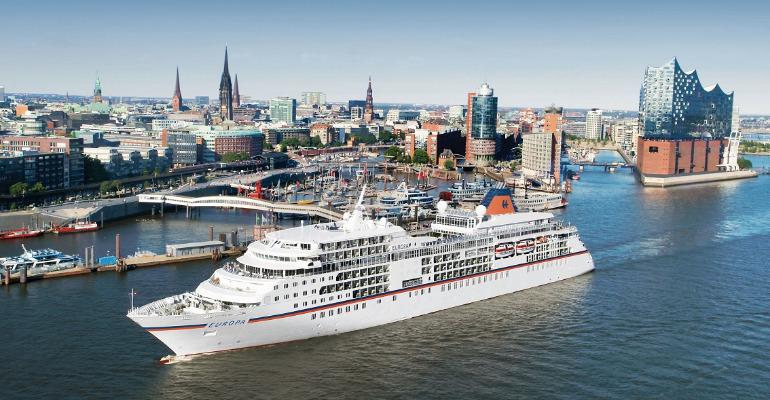 Early this morning, Hapag-Lloyd's Europa arrived in Hamburg in preparation for its restart after a lengthy layup at Bremen

Hapag-Lloyd Cruises has completed the reactivation of its fleet, as flagship Europa arrived in Hamburg July 12 in preparation for a 13-day sailing starting July 13.

The line’s four ships are now in operation and will be complemented by newbuild Hanseatic Spirit following its inauguration in August.

The 1999-built Europa operated a number of North European itineraries in late summer and autumn last year, but was withdrawn later in autumn owing to the situation with COVID-19 in Germany and its neighbouring countries. A lengthy layup at Bremen followed.

On July 11, Europa eventually set sail on a trial voyage from Bremen to Hamburg, arriving in the morning of July 12.

Europa’s first cruise after the long break will see it traverse the Baltics to Kiel, including a Kiel-Canal transit, with stops including but not limited to: Copenhagen, Karlskrona, Stockholm, Visby, Gdansk, Malmö and Gothenburg.

A Zodiac excursion through the canals of Copenhagen are among the highlights.

The sailing will be followed by a nine-day roundtrip from Kiel, featuring a stop at Malmö, cruising off Moen Island and Turku, as well as calls at Stockholm, Visby and Gdansk among others.

Europa will offer various other itineraries throughout the rest of summer, mainly in Northern Europe, as well as a 13-day cruise in the second half of August that sees the vessel travel south to Bordeaux calling at Antwerp, Honfluer, St. Malo and La Pallice plus other ports.

Starting September 30, Europa will leave the North, departing on a 15-day itinerary from Hamburg bound for Palma de Mallorca.