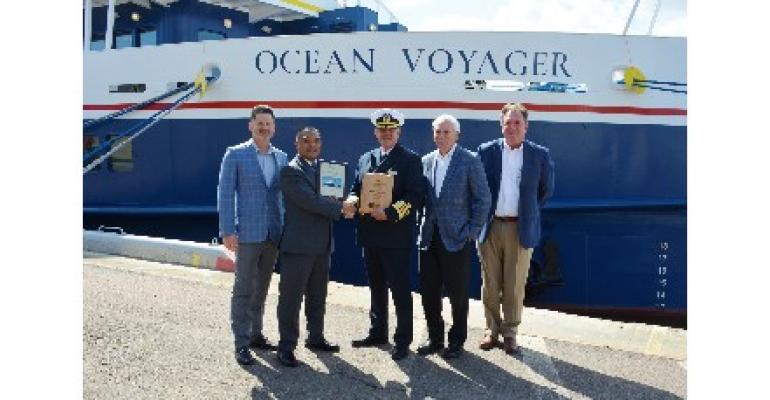 American Queen Voyages marked Presidents' Day with two milestones, one in Florida and one in Louisiana.

Ocean Voyager became the first vessel in the company's lakes and oceans division to return to US waters with passengers in two years. It was welcomed to the Jacksonville Port Authority after completing its maiden Southeast US voyage.

And, in New Orleans, paddlewheeler American Queen departed for Memphis, marking the beginning of the company’s 10th anniversary season on the Mississippi River.

'Our location in the heart of the Southeast US makes Jacksonville an ideal host city for passengers looking to explore the region,' Wong said. 'From beaches and history to world-class golf, shopping and dining, Northeast Florida has so much to offer passengers before and after their cruise. We are proud to welcome American Queen Voyages passengers and thank them for beginning and ending their journey in Jacksonville.'

These cruises will then resume in November.

And down in New Orleans ...

Also on Monday, American Queen Voyages’ 2022 rivers season set off with the grande dame American Queen embarking on a nine-day Lower Mississippi River sailing. The voyage connecting the iconic ports of New Orleans and Memphis is the line's most popular itinerary.

Schedule for the rest of the fleet and Alaska expeditions debut

Ocean Navigator, sister of Ocean Voyager, will return to service in Savannah, Georgia, April 11 and make its way up the Atlantic coast and through the St. Lawrence Seaway for the Great Lakes season.