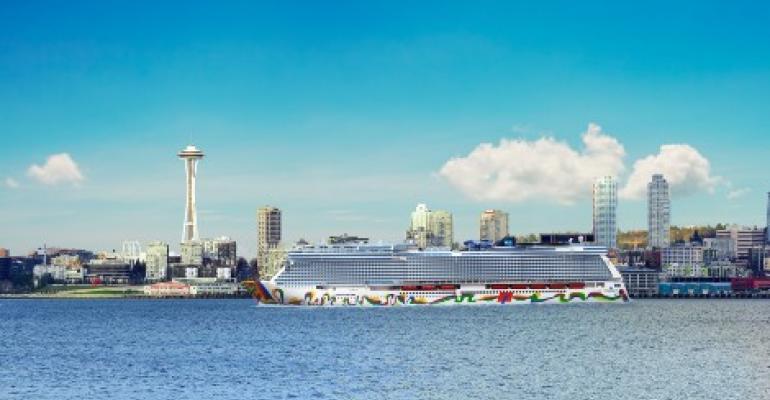 NCL's newest ship, Norwegian Encore, will be sailng from Seattle to Alaska this summer, instead of the previously announced Norwegian Bliss

In addition, the line is putting Norwegian Encore, its newest ship, in Alaska in place of Norwegian Bliss.

Voyages are contingent on obtaining a conditional sailing certificate from the Centers for Disease Control and Prevention and all will operate with crew and passengers fully vaccinated for COVID-19.

This makes plans announced for 23 of Norwegian Cruise Lines Holdings' 28 ships, including Oceania Cruises and Regent Seven Seas Cruises, beginning in July and phasing in through early 2022.

Frank Del Rio, president and CEO of NCLH, thanked Gov. Ron DeSantis and Florida for 'fighting in support of our industry,' adding: 'His leadership helped bring the CDC to the table. We are currently in communication with his staff and legal counsel to ensure that we can offer the safest cruise experience for our passengers departing from the cruise capital of the world.'

Since the governor has held fast on his vaccine passport ban, it remains to be seen how things will be handled on cruises from Miami and Port Canaveral.

(In recent days, Carnival Cruise Line indicated vaccination is the way to go, a shift from its past stance, while Royal Caribbean International, in announcing new US departures, said vaccination is 'strongly recommended' (not mandated) but indicated a high percentage of passengers currently state they are or will be inoculated before cruising.)

NCL's newly announced deployments include, from PortMiami, Norwegian Gem on seven-day cruises beginning Aug. 15 and a four-day voyage to the Bahamas in November. Norwegian Escape will start sailing Nov 13  to the Caribbean from Port Canaveral.

Additional itineraries on Norwegian Breakaway are open for sale to Bermuda starting Sept. 26 from New York.

Norwegian Bliss will sail on Oct. 24  to the Mexican Riviera from Los Angeles.

Norwegian Encore will make its debut on the West Coast  taking the place of the previously announced Norwegian Bliss for the summer Alaska cruise season. The Alaska itinerary includes visits to Juneau, Skagway, Ketchikan and Icy Strait Point with scenic cruising to Endicott Arm and Dawes Glacier or Glacier Bay.