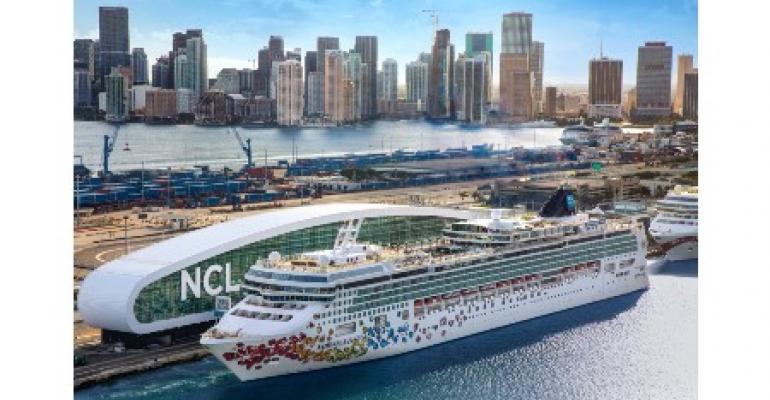 Also significant, NCL was able to document that everyone was vaccinated for COVID-19, thanks to the week-ago judge's order granting the company's request for a preliminary injunction to stop Florida from enforcing its vaccine passport ban.

'It has been an exhilarating few weeks as we relaunch our fleet, reunite with our shipboard families and welcome our guests back for their long-awaited cruise vacations,' NCL President and CEO Harry Sommer said. 'I've been impressed and proud of how our global team and partners have come together to safely bring back cruising, an over $55 billion industry that positively impacts communities around the world.

'Today is even more special as it is the first time we are relaunching from our hometown and from the new NCL terminal at PortMiami.'

Dubbed 'Pearl of Miami,' the distinctive building has towering sides of glass. It can accommodate ships carrying up to 5,000 passengers.

It was built to LEED Gold standards for optimizing energy, water efficiency, air quality and utilization of local materials and resources. In addition, approximately 90% of subcontractors, vendors and suppliers were local. Parent company Norwegian Cruise Line Holdings recently announced a partnership with Miami-Dade County to make the terminal shore power-ready by fall 2023.

Constructed by NV2A Group and Haskell, and designed by Miami-based Bermello Ajamil & Partners, the approximately 188,000-square-foot building draws inspiration from a nautilus, with its spiraled and multi-level façade opening to grand ocean and city views with approximately 122,000 square feet of energy-saving glass features. Art throughout was curated as part of Miami-Dade County Art in Public Places.

Norwegian Gem is scheduled for weeklong Caribbean voyages and four-day Bahamas cruises through Oct. 17 before repositioning to New York for five- to 11-night voyages to the Bahamas, Caribbean and Bermuda.