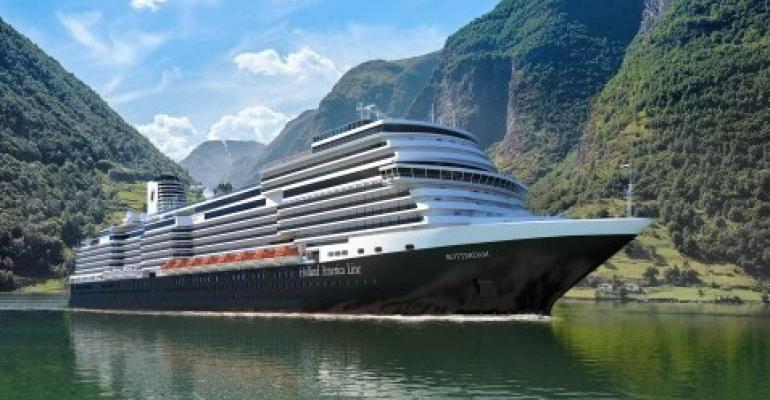 Rotterdam will debut at the height of the summer season
From Greenland to Greece and Iceland to Israel, five Holland America Line ships are set to explore Europe and beyond in 2021.

They include Rotterdam, scheduled to debut at the height of the summer, along with Nieuw Statendam, Westerdam and Zuiderdam. Zaandam heads to Europe on a 'Voyage of the Vikings' itinerary in July.

From April through November, the five ships will offer itineraries of seven to 35 days, as well as longer Collectors’ Voyages up to 29 days. In addition to trans-Atlantic crossings between Fort Lauderdale and Europe, the vessels will visit the Baltic, British Isles, French and Spanish rivieras, Iberian Peninsula, Greenland, Iceland, Norway and the North Cape.

Many of the cruises can be extended into Collectors’ Voyages ranging from 14 to 29 days.

Rotterdam's seven-day premiere voyage sails from Venice to Civitavecchia on Aug. 1 before the ship continues with Northern Europe cruises round-trip from Amsterdam. Through October, Rotterdam will offer three seven-day itineraries to Norway, one 14-day Baltic cruise and one 14- day Norway, Iceland and British Isles sojourn. A trans-Atlantic crossing takes the ship from Amsterdam to Fort Lauderdale.

‘Voyage of the Vikings’ on Zaandam

This 35-day journey that traces the route of ancient explorers returns in 2021. Zaandam embarks from Boston on July 17, calling at ports in the US, Canada, Greenland, Iceland, Norway, the Netherlands, Northern Ireland and Ireland. Segments from Boston to Rotterdam (16 days) or from Rotterdam to Boston (19 days) are available.

Westerdam and Zuiderdam will spend the full season in the Mediterranean, sailing a combination of 11- and 12-day cruises from Civitavecchia, Venice, Barcelona and Piraeus. The ships will visit popular ports like Istanbul; Mykonos and Monte Carlo, along with lesser-known jewels like Koper (Slovenia), Limassol (Cyprus) and Rijeka (Croatia). Many of the cruises are bookended with an overnight in Venice or Athens.

A 12-day 'Holy Land and Ancient Kingdoms' itinerary round-trip Venice in May charts a course for Haifa and Ashdod, Israel.

Travelers who book 2021 Europe cruises by Sept. 30, 2020, can receive up to $2,300 in amenities, including a free Signature Beverage Package, gratuities, Signature Dining Package and 50% reduced deposits, plus free Wi-Fi for suites. HAL is also offering 20% savings on shore excursions pre-booked by this Sept. 23.