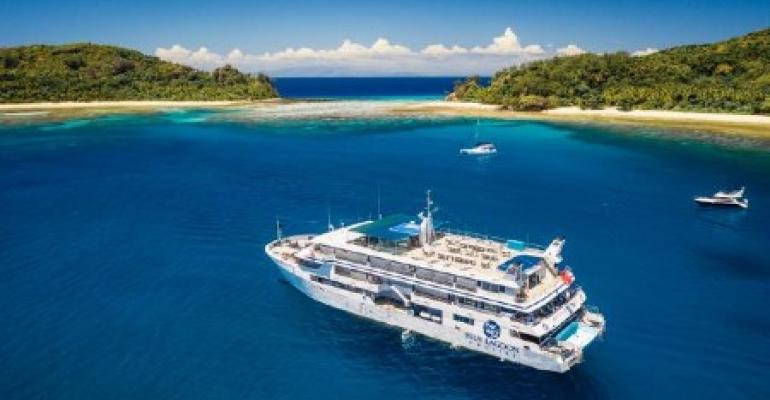 Fiji Princess will resume sailing its seven-night round cruise to the Mamanuca and Yasawa Islands in January
Here's a quick read of some of today’s coronavirus-recovery cruise news. This will be updated throughout the day.

Blue Lagoon Cruises will resume sailing on January 14, following the Fijian government’s decision to reopen to international travellers next month after battling the COVID-19 pandemic.

Hot on the heels of this announcement, Qantas advertised flights to Fiji, anticipating that Australia will have opened its borders by then.

Its 55-metre Fiji Princess is berthed at Port Denarau, a short drive from Nadi International Airport, and carries 68 passengers, with an all-Fijian crew of 30.

She operates a seven-night ‘Escape to Paradise’ round cruise, sailing through the Mamanuca and Yasawa Islands.

A high-speed transfer vessel meets Fiji Princess in the Sacred Islands with passengers joining the ship for the four-night ‘Wanderer Cruise’ and the three-night ‘Explorer Cruise.’

Passengers will need to be fully vaccinated and screened before boarding.

Celestyal Cruises plans to resume sailing year-round on March 14, 2022, with three- and four-night cruises followed by seven-night sailings on April 30.

One of the few lines to consistently call at Turkey, Celestyal will also return to Kusadasi and adds Thessaloniki, the second largest city in Greece, to its seven-night 'Idyllic Aegean' itinerary.

Celestyal will also return to the less-discovered island of Milos, recently named the 'World’s Best Island' by Travel+Leisure magazine and an island not traditionally visited by lines with larger ships. The stay there will be extended from a half day to a full day.  This itinerary also includes Mykonos, Santorini, Crete, Rhodes and Kusadasi.

Celestyal’s 'Eclectic Itinerary' includes Kavala, the northern, centuries-old Greek port city on the Thracian Sea. Nine miles away is the ancient city of Philippi, home to the first Christian church in Europe. This itinerary also includes Thessaloniki, Santorini, Volos and Istanbul (an optional port of embarkation/disembarkation).

And the end of 2022 will see the return of Celestyal’s 'Three Continents' seven-night itinerary, last operated in late 2019. It calls at Greece, Turkey, Israel, Egypt and Cyprus. This will be followed by two holiday cruises.

A 10-night Christmas voyage calling at Thessaloniki, Izmir (Turkey), Rhodes, Limassol (Cyprus), Alexandria (Egypt) and Haifa (Israel), overnight, lets passengers spend both Christmas Eve and Christmas Day in the Holy Land. And an eight-night New Year's cruise visits Heraklion, Santorini, Volos, Kusadasi and Istanbul, with an overnight stay there to take in the New Year’s Eve fireworks. The two sailings may be combined.