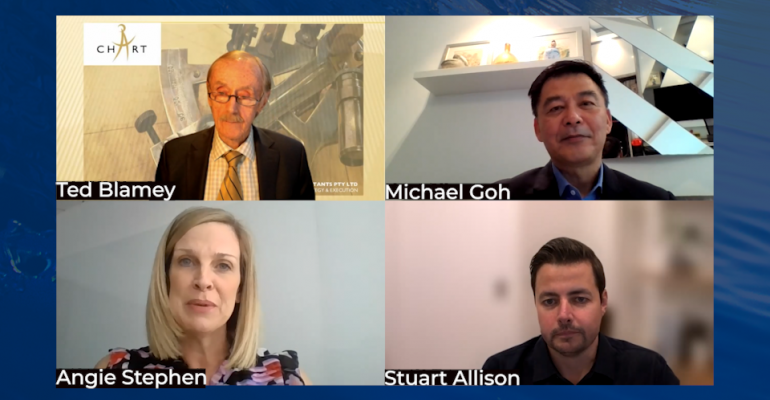 Since the March 2020 close-down, cruising started again in a rolling sequence across Asia Pacific from July 2020 (with some pauses) from four homeports with thousands of passengers carried.

These restarts comprise cruises to nowhere or destinations within the country: island-hopping in Taiwan from Keelung and cruises to nowhere from Singapore and Hong Kong and Japan-only cruises from Yokohama, explained moderator Ted Blamey, principal at Chart Management Consultants as an entrée to an Asia source markets discussion Tuesday during Seatrade Cruise Global 2.0 Power Week.

The situation is slowly improving, noted Blamey, with some more deployments announced with Zhao Shang Yi Dun (formerly Viking Sun) just started from Shenzen with domestic and island itineraries with Sanya the focus, and Norwegian Sun planned to start from Singapore, Hong Kong and Bangkok to Japan and South East Asia from January 2022, and then longer 10-night cruises.

In total, 13 cruise ships have been announced for Asia next year.

Michael Goh, president Dream Cruises & head of international sales Genting Cruise Lines, which has carried over 300,000 guests on ships from Taiwan, Singapore and Hong Kong since sailings resumed, stated: ‘Customer experience is key on these cruises without any stops and so we decided to theme our Singapore sailings from mid-September to early November bringing world festivals to the ship with a spotlight on cuisine and lifestyles focussing separately on Korea, Thailand, Japan and the world to entice repeaters back every few months. From mid-November to the end of the year we will offer a Nordic Christmas adventure,' he said.

Royal Caribbean’s Quantum of the Seas from Singapore was the first ship out of the gate for the brand, noted Angie Stephen, VP and MD Asia Pacific Royal Caribbean International and ‘we have sailed over 100 times carrying over 100,000 guests with a high number of first timers who see cruising as a good way to get away safely.’

Since mid-October Spectrum of the Seas has been sailing from Hong Kong and is selling well, noted Stephen, ‘with people having an excuse to use their passport again.'

With the ship being the destination on a three- or four-night cruise, it is not possible to experience everything on board, she noted, and like Genting, RCI is also seeing many repeaters.

Stuart Allison, SVP Asia Pacific, Princess Cruises said the brand has every intention to get cruising from both Taiwan and Japan next year. ‘We didn’t consider putting a Princess ship in Singapore on a cruise to nowhere as our Asia product is based on longer itineraries that source from multiple locations but it surprised us how successful it has been in the UK and an important driver of newcomers.’

‘In many Asian countries there is an avoidance of people using all their holiday which is why in Korea and Japan shorter cruises are preferred,' Allison said. ' .... as cruise matures as a vacation type then repeaters may be looking for longer, destination-rich experience.'

Royal Caribbean International's Wonder of the Seas is going to debut in the US, then Europe in 2022. The fifth Oasis-class ship had originally been announced for Shanghai, China.

Asked if China as a source market is finished, Stephen replied: 'Mainland China is one of the largest outbound markets and it’s in hibernation currently but I can’t see that going on forever,’ adding, ‘Whilst China has given no indication about resumption of international cruises we have more Oasis-class ships building so hopefully we can bring one to China when the time is right.’

India holds huge potential as a source market with just 0.02% penetration currently. Goh sees a growing demand from high-end Indians and Stephen said with India on target to have a larger population than China inside five years she sees it as a growing source market, not just for cruises out of Asia but beyond.

Allison was more cautions: 'The outbound travel market is relatively modest compared to the population size and so we need to see Indians travelling around the world more before we see a cruise boom from there.’

What of the future for Asia Pacific cruising? Allison was first to respond: ‘Cruise will rebound as we see a huge potential for Japan to grow, and for Taiwan, too, based on Dream Cruises’ recent experience. There is so much pent-up demand we see the momentum Asia had going into 2020 will carry on once we reach 2022/23.’

Stephen added, ‘Recent deployments have opened cruising to a new audience and as it has proved to be one of, if not, the safest holidays to take a holiday, many will be tempted to cruise who have not considered it before.’

Goh was 'also optimistic about opportunities for growth across Asia particularly from newcomers and this bodes well as we have the 201,000gt Global Dream joining the fleet next year.’

Register here for a virtual pass to watch this and other Asia Pacific sessions, as well as the entire program from the Seatrade Cruise Global Miami Conference, on demand and to network.